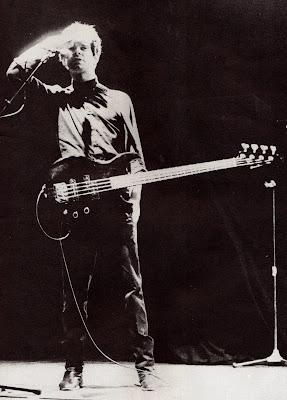 'Where's rows A to C Hugh?'
Today marks the anniversary of a gig that never was. 30 years ago tonight, the band were due to play a second night at the Hammersmith Odeon. However, the gig was cancelled by the venue management after fans had ripped out seats in the front row stalls on the previous night and it is this gig that I am sharing with you here.
Quite clearly, the management had figured that with this band came trouble (it's a view that was a little outdated by 1983, but London had always had a difficult relationship with The Stranglers). It was with the ranks of bouncers that, backs to the band stared out a the throng of fans, the band took umbrage with.
To the delight of the crowd, two songs into the set, the band took matters into their own hands and Jet gave the bouncers a dressing down, refusing to play whilst they remained in front of the stage. After prompt negociation with venue officials, the gig continued without security, Hugh having said (to the crowd) that they wouldn't cause any damage. The four men on stage must have felt left with many egg on their faces as a minority of the crowd took it upon themselves to rearrange the furniture regardless of the reassurances that the band had given that resulted in the withdrawal of the venue security. 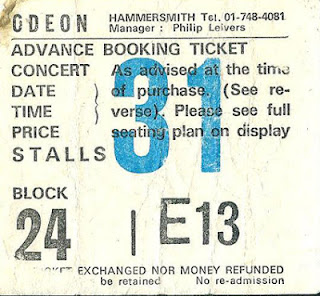 A big thanks here goes to Dom P, who provided an extremely rapid disc replacement service and in doing so upgraded the sound quality of what I originaly had. Thanks as always Dom!

1 Nuclear Device
2 Toiler on the Sea
3 Jet Winding Up the Bouncers
4 Ships That Pass in the Night
5 Its A Small World
6 Just Like Nothing on Earth
7 No More Heroes
8 Who Wants The World
9 Never Say Goodbye
10 Baroque Bordello
11 Golden Brown
1 Princess Of The Streets
2 Midnight Summer Dream
3 European Female
4 Tramp
5 The Raven
6 Duchess
7 London Lady
8 Nubiles (Cocktail version)
9 Down In The Sewer
﻿
Posted by Musky03 at 13:42