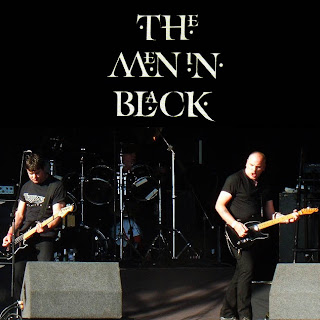 
I am very pleased now to be able to share this recent acquisition of mine. The reason is simple, this was one of the most significant gigs that I have been to in that it kick started the whole Stranglers thing off again after several (13 I think) years of disinterest on my part.

I have previously written about this gig here, but I don't mind repeating myslf on this one. On the day, the entire Andrews family were in attendance and what a fine day it was too. Blisteringly hot it took my best efforts to keep myself 'hydrated' with beer! Amongst the Stranglers fans present (most of whom were unknown to me by that time) spirits were high. There was a sense of celebration in the air for indeed for some, a celebration this was..... we had heard the recording of the Weston-Super-Mare gig a few weeks before and could not wait to hear the band as a four-piece once more. Paul Cooklin was smoking a cigar at the bar that was worthy of Churchill to mark the event! Paul and I were about to go full circle with this band. 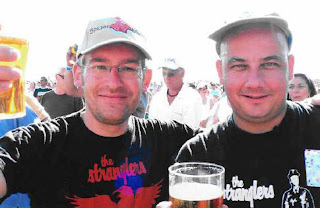 'Dr Cooklin I Presume?'
Adrian after years in the wilderness with Paul Cooklin
Guilfest 16th July 2006

And so it was that with the shrill falsetto of Russel Mael of the brilliant Sparks out of the way and the strains of Donovan's Jennifer Juniper had evaporated in the heat of this most atypical of British summer afternoons, I was faced with the acid test (sulphuric acid of course). Would it be as good as I wanted (make that needed) it to be?

Any doubts on the matter disolved rapidly as Dave stroked his first keys in the intro to '5 minutes'..... then the bass kicked in... and then.... oh Jesus, the bass player's vocal. At that point in a sweltering Surrey field, I must have made the Cheshire Cat look like Jack Dee..... with a bellyful of beer and good company to boot, this surely was my very own Battersea Park! 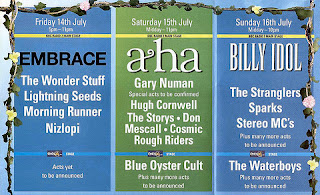 Interestingly, Hugh appeared on the bill, playing on the Saturday night. Headlining on the Sunday night was Billy Idol, and I'm pleased to say that whilst some punk feuds have bee laid to rest in the intervening years, the antagonism between The Stranglers and Idol still seems to have some heat left in it. I heard a story that after the Stranglers had come off stage and relaxing in the backstage area, one of Billy Idol's entourage entered and announced that 'Mr Idol would now like this area cleared!', to which JJ responded with something along the lines of 'Tell Mr Idol that if he wants us out of here he'll have to fuckin' do it himself!'

Idol went on to have some digs about hits from the stage during his set, but I didn't stick around.
Posted by Musky03 at 21:06