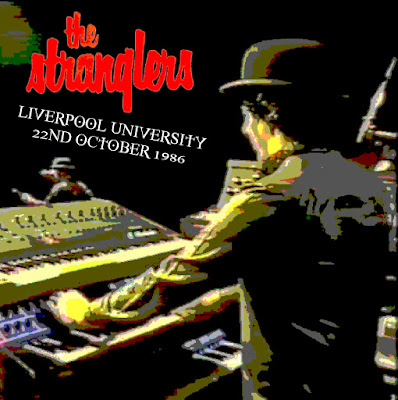 Here is the Dreamtime set from the band's gig at Liverpool University accompanied by another glowing review, this time from the pages of Record Mirror, who once upon a time were staunch defenders of the band. 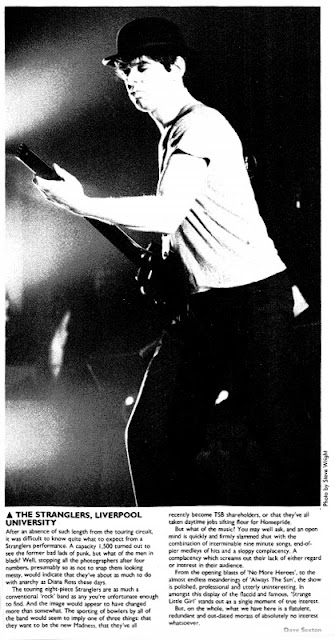 Record Mirror (8th November 1986)
THE STRANGLERS, LIVERPOOL UNIVERSITY
After an absence of such length from the touring circuit, it was difficult to know quite what to expect from a Stranglers performance. A capacity of 1,500 turned out to see the former bad lads of punk, but what of the men in black? Well, stopping all the photographers after four numbers, presumably so as not to snap them looking messy, would indicate that they’ve about as much to do with anarchy as Diana Ross these days.
The touring eight-piece Stranglers are as much a conventional ‘rock’ band as any you’re unfortunate enough to find. And the image would have appeared to have changed more than somewhat. The sporting of bowlers by all of the band would seem to imply one of three things; that they want to be the new Madness, that they’ve all recently become TSB shareholders. Or that they’ve all taken day jobs sifting flour for Homepride.
But what of the music? You may well ask, and an open mind is quickly and firmly slammed shut with the combination of interminable nine minute songs, end-of-pier medleys of hits and a sloppy complacency. A complacency which screams out their lack of either regard or interest in their audience.
From the opening blasts of ‘No More Heroes’. To the almost endless meanderings of ‘Always the Sun’, the show is polished, professional and utterly uninteresting. In amongst this display of the flaccid and famous, ‘Strange Little Girl’ stands out as a single moment of true interest.
But, on the whole, what we have here is a flatulent, redundant and out-dated morass of absolutely no interest whatsoever.
Dave Sexton
FLAC: https://we.tl/t-v2wkHs2odU
Artwork: https://we.tl/t-40u0eBKSA9
01. No More Heroes
02. Was It You?
03. Down In The Sewer
04. Nice In Nice
05. Punch And Judy
06. Souls
07. Always The Sun
08. La Folie
09. Strange Little Girl
10. Nice ‘N’ Sleazy
11. Who Wants The World?
12. Big In America
13. Bring On The Nubiles
14. Shakin Like A Leaf
15. Uptown
16. Toiler On The Sea
17. Spain
18. Peaches

Email ThisBlogThis!Share to TwitterShare to FacebookShare to Pinterest
Labels: 1986, The Stranglers