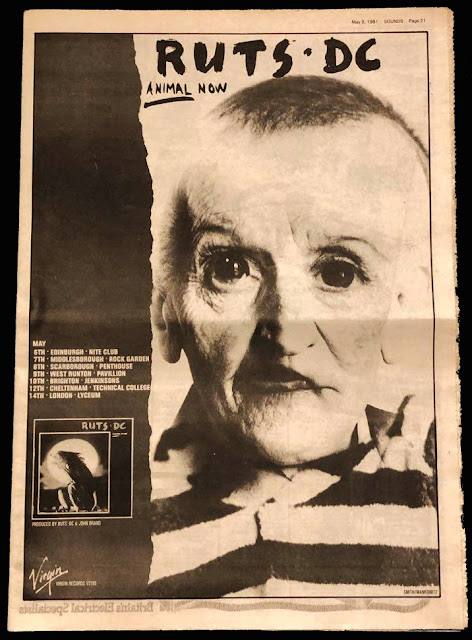 I cannot confess to know what the band or the creatives behind the album ad were thinking with the rather terrifying imagery that was used to advertise the first Ruts DC album..... Leigh? But creepy ads aside, 'Animal Now' is one of my favourite albums of all time.... true there are very many favourites, but still you have to go some to make the list!

It is an album born out of anger, frustration and despair and each those emotions spill out from your speakers each time you play this album. It is the very rawness of those emotions that make this debut album so compelling. In 1979, The Ruts had it for the taking, the music press loved 'em, the kids love 'em, radio loved 'em! They were angry, yet fun, highly accomplished musically and just, well, generally a cut above most of the second wave of punk bands (along with Stiff Little Fingers). But that potential was lost to the heroin that took Malcolm Owen's life in the summer of 1980. It is primarily the genuine loss of a mate along with the loss of a golden opportunity to grow as a band of style and substance that shaped 'Animal Now'.

Segs and Ruffy have in the past spoken of how difficult it is to play some of those songs, a feeling compounded later by the loss of Paul Fox in 2007 no doubt. As I write this, I am listening to the track 'Despondency' and it makes me feel tense, it is brilliant and yet it jars, it is claustrophobic in a way that certainly qualifies its place in the 'Uneasy Listening' rack of your local record shop (if indeed you still have one!). Funnily enough, Killing Joke's music has the same effect on my wife, Gunta, her blood pressure actually increases if I play them!

I am in no way complaining about Ruts DC's industry since they reformed in 2011, far from it, but an inevitable consequence of new material is that the old must give way and this has happened for the songs from 'Animal Now'. I really do miss them as they are such a big part of the Ruts/Ruts DC story.

Perhaps some day, when this is all done and dusted (in the year 2525 as Zager and Evans would have it), the band could do a set (a convention set?) of this album.... I reckon I'll be ready for another gig by then!

Anyway, in the post title I mentioned a review and her it is, from Sounds, Garry Bushell's Oi! vehicle at the time. In contrast to Bushell's slating of 'Different View' in the same said publication Robbi Millar's review is positively glowing, he clearly being one of the 'fortunate few who have the ears to hear, the vision to see and the intelligence to comprehend' as Hugh Cornwell may have said once upon a time. 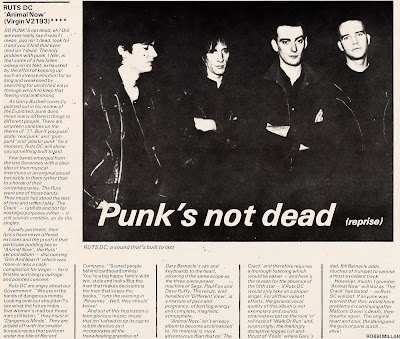 This just in from Segs...

'Isn’t that the advert for Nothing compares 2U ?   Yes -a bad period for artwork at virgin !  Inside cover shot by Gered Mankowitz though —I read this review the other day !  As you know —I’ve ALWAYS loved that album :). Great piece from Adrian though —thanks for sending ...We’ll be back ( hopefully) x '