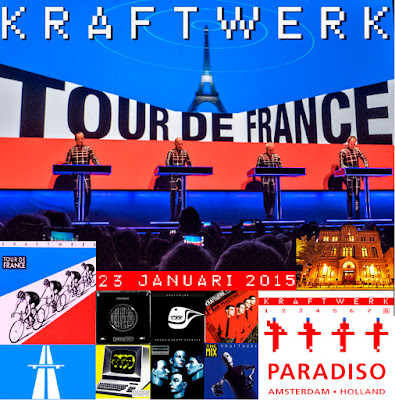 So here is the last installment of an extraordinary run of consecutive gigs, a tour of the Kraftwerk back-catalogue culminating with 2003's 'Tour De France Soundtracks'. This was the last tour that the band did with founding member Florian Schneider, who wanted to step back from touring. In addition to revisiting the title track, 'Tour De France' that the band originally released in 1983.
Featuring some excellent new material such as 'Aéro Dynamik', and 'Electro-Kardiogramm' the album was a strong reassertion of Kraftwerk as a trendsetting band, a happy return to form after the disappointment of their studio album of new material, 1986's 'Electric Cafe'.
Sadly we lost Florian last year, but Ralf Hutter continues to play with the band. It is funny that on the first two occasions that I saw then in 1991 and 2004 getting my hands on a ticket was not an issue. It was a different story when I tried to get a ticket for one of the back-catalogue that Kraftwerk put on at the Tate Modern, itself a former power station (geddit?)....  I failed. It was a similar story in 2017 when Kraftwerk announced a 3D tour. I did eventually manage to get a ticket for my daughter and I but we had to travel to Belfast to see them.
FLAC: https://we.tl/t-oyYuY863ET
Artwork: https://we.tl/t-a0qifPMaZy
01. [intro]
02. Tour De France 1983
03. Prologue
04. Tour De France Étape 1
05. Chrono
06. Tour De France Étape 2
07. Vitamin
08. Aéro Dynamik
09. Elektro Kardiogramm
10. La Forme
11. Régéneration
12. Intermission
13. News
14. Geiger Counter
15. Radioactivity
16. Spacelab
17. The Model
18. Neon Lights
19. The Man-Machine
20. Numbers
21. Computer World
22. Home Computer
23. Computer Love
24. [banter]
25. Trans-Europe Express
26. Abzug
27. Metal On Metal
28. [encore break]
29. The Robots
30. [encore break]
31. Planet Of Visions
32. Boing Boom Tschak
33. Techno Pop
34. Musique Non Stop
35. [encore break]
36. Autobahn
Posted by Musky03 at 11:34