"Will no one rid me of this turbulent President?" - King Henry II of England (almost verbatim) 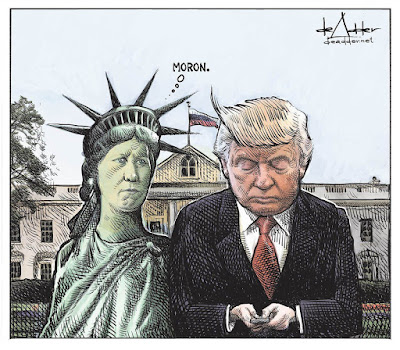 Now look, this is a music website first and foremost and as such you will not find much politics on here. Don't get me wrong I am certainly not apolitical but neither am I an angry late night keyboard political activist. I save that for Newsnight when I can be observed to be shouting and expleting at the television screen like a good 'un. Nevertheless, by the same token I do not subscribe to the train of thought that music and politics do not or should not mix. Music is one of the oldest forms of expression and therefore of protest and dissent. The bands represented on Aural Sculptors are certainly not of a kind to leave a political viewpoint in the venue cloakroom, think, 'Rock Against Racism', 'CND', 'Amnesty International', 'Artists Against Apartheid'.... so many bands on here have nailed their colours to one or other such mast.

This evening as I have prepared another great work up by Dom P of a gig by The Specials in New York on their first US tour in 1980, the most recent bum burp to pass the Narcissist-in-Chief's lips were playing on my mind.

In announcing positive employment figures and linking that to an indicator of greater equality he amazingly brought George Floyd's into the speech with the following words:

"Hopefully George is looking down and saying this is a great thing that's happening for our country. A great day for him. It's a great day for everybody."

The man is dangerous and unhinged.
Posted by Musky03 at 01:13

Email ThisBlogThis!Share to TwitterShare to FacebookShare to Pinterest
Labels: 2020