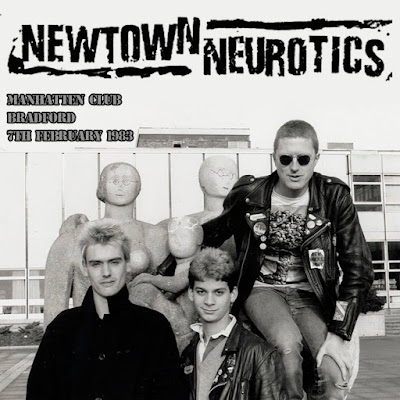 The following two posts are something rather special, for me at least. Two sets from a gig played in Bradford 37 years ago. The Newtown Neurotics and Attila The Stockbroker in a combined offensive (as was and still is so often the case) captured here with excellent sound early on, at around the time of each of their debut albums, 'Beggars Can Be Choosers' and 'Ranting At The Nation' respectively. 1983 was an election year and four months after this gig, Margaret Thatcher was re-elected, retaining control in a landslide victory over Labour, buoyed by success in the South Atlantic the previous summer.

The new strain of economics was already being felt in Britain's heavy industry sectors in the north. The Neurotics and Attila railed against this lurch to the right and the policies and schemes that did so much to widen the gulf between the rich and the poor in this country. But in February of 1983, the Miner's Strike, perhaps the biggest battle fought by these two acts, along with many other bands of the left, in a very long war was some way in the distance.

The songs speak for themselves.

So here it is for your listening pleasure, across two posts, I give you the authentic sound of Harlow Town 1983!

As a cultural aside, for those with an appreciation of modern British sculpture, The Neurotics are pictured here in the company of 'Harlow Family Group' a 1954-55 commissioned piece by Henry Moore (whose Perry Green residence is very close by to Harlow and Bishops Stortford). It represents the families who were relocated from bomb damaged East London to the newly created Newtown of Harlow and the baby boom that occured in the early post-war years. The spectacles were a later embellishment (probably not by Henry Moore!).