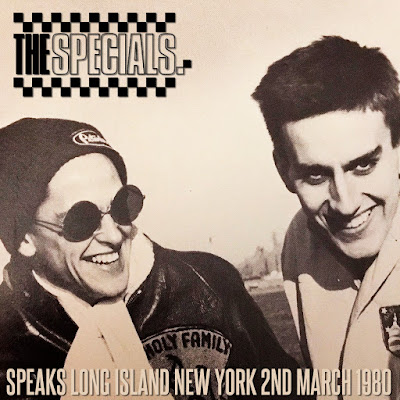 I mentioned that I was putting this one together last night as I went off on one about Trump. The Specials should be invited to play in the Whitehouse Rose Garden and Donald Trump should be tied to a chair right at the front, centre stage.... just so that he doesn't miss anything. In my vision he would be wearing eye specula, in the same manner as A Clockwork Orange's Alex had to do during his aversion therapy, just to ensure that the band have his undivided attention. And then The Specials should hit him full force with the same message that they have been delivering for the past 42 years! Hitting him with anything else as well is permissible at this gig.... if Terry wants to throw tambourines like he was wont to do back in the day, give him a pile of the bloody things!

..... anyway back to reality, here are The Specials on the last night of their first US tour and on this night local girl Debbie Harry is on hand to introduce the band to the stage. Being little over a decade since the Civil Rights struggles of the late '60's, even in cosmopolitan New York, the sight and sound of this multi-racial band with a message of peace, love and unity delivered at the breakneck pace of punk must still have been something of an eye-opener. If the band are knackered after a grueling slog around the US hey certainly hide it well on the night!

Many thanks to Dom P for playing with the sound. Listen to The Specials and fuck Donald Trump!

Email ThisBlogThis!Share to TwitterShare to FacebookShare to Pinterest
Labels: 1980, The Specials