I have now spent a couple of years researching the military history of Jim Heath, my late maternal Grandfather with special emphasis on his time spent in North West Europe in 1944 to 1945.

The evolving history is documented here:

However, in brief, he landed with the 59th (Staffordshire) Division (5th Battalion South Staffordshire Regiment) as a follow-up Division after D-Day on 25th June. Fierce fighting for the pivotal city of Caen and engagements in the area to the south east of Caen decimated the 59th to such an extent that the Division was disbanded and he was transferred to the 49th (West Riding) Division with whom he became a Royal Scots Fusilier of the 11th Battalion. With the 11th R.S.F. he fought across France, Belgium and Holland where wounds received in a notorious place known as The Island (a flooded landscape situated between the Upper and Lower Rhine that separates Nijmegen and Arnhem) ended his active service. Nevertheless, his medical reclassification from A1 to B6 meant that he was still fit for a non-front line posting overseas and he rejoined the RSF in Germany as part of the British Army of Liberation. As part of 12 D.P.A.C.S. (Displaced Persons Assembly Centre) he ended his Army service as an administrator at Bergen-Belsen camp.

My research through the Polar Bear Association  (49th (West Riding) Division) lead me to one Ken West, a hale and hearty 93 year old veteran from Leicester. Last weekend, I had the honour of spending a few hours in conversation with this gentleman to discuss various Polar Bear related topics.

Fusilier West served in D Company but returned to A Company after recovering from wounds received in Normandy. Not fancying the lot of a Rifleman again he pushed his specialism and rejoined the Battalion as a signaller. So it was that their time in the same D Company did not overlap. Nevertheless, another coincidence came to light in the course of the conversation. My Grandfather enlisted with the North Staffordshire Regiment as did Ken’s brother Ernest. For the visit I happened to have with me his order to proceed to Litchfield Infantry Training Centre. He was required to be there on 15th January 1940, the very same day that Ernest was to report too. So, it just may have been the case that Jim and Ernest were acquainted, albeit briefly.

This meeting with Ken West was highly significant for me, as some twenty years after my Grandfather’s death I had the opportunity to talk with a man who shared the same day to day experiences, the terrifying as well as the mundane, in exactly the same places at the same time. I can honestly say that when I started out on this project I never had this in my mind as a possibility.

This was certainly a photo opportunity and Ken was happy to oblige. For the occasion, his blazer and Polar Bear Association tie were retrieved from the wardrobe so that he was with 'his bling'. 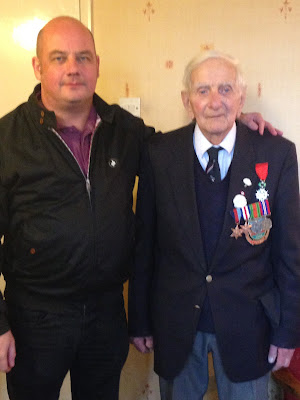 Me and Fusilier Ken West 14638023
(note the red 'bling', none other than the Ordre national de la Légion d'honneur!)

We shook hands as we parted company and Ken gave Gunta a kiss with the words 'Now you can say you've not only kissed an old soldier, but a French Knight!' 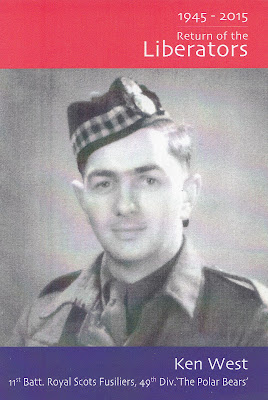 I would like to thank Ken for his time (as well as his son Steve) and also to Gunta who ferried me to Leicester and back.
Posted by Musky03 at 21:07