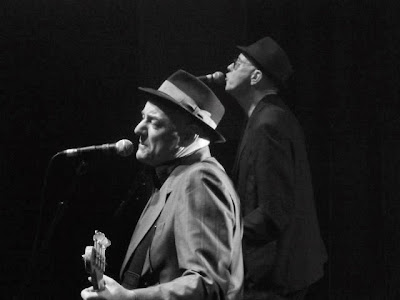 This was very much an unexpected one on two counts as I anticipated being in Budapest when I was informed by a very excited Leigh Heggarty that Ruts DC were playing a one off gig at KOKO supporting, and here's the other surprise.... Wilko Johnson!! London thought that it had bade a fond farewell to Wilko back in March when he played what was poignantly billed as 'The Last Tour'. 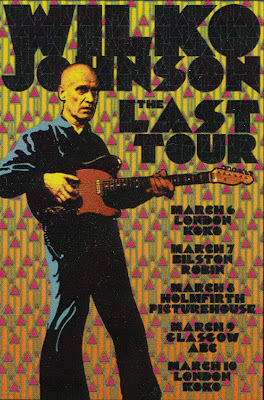 But it is our good fortune (not to mention his) that Wilko's health is holding up, allowing him to continue to play.

This was a first for me as I never saw a gig at the Camden Palace (let alone The Music Machine) so I was interested in this one from that point of view as well. The venue is an imposing building opposite Mornington Crescent tube station, inside it is very plush, with the heavy drapes and ornate boxes typical of many of London's surviving Victorian theatres.

I was slightly unnerved as I first walked into the auditorium as a quick glace towards the stage necessitated a double take...... a young Wilko!! But this was in fact the tail end of Eight Rounds Rapid's set which is Wilko's son's band, who sound not unlike one Dr Feelgood!

This evening, Ruts DC's set was to be compressed down to 40 minutes, so every song counted. Prior to the gig, a friend had told me that the sound in KOKO was always bad, but from where I was standing, mid venue, the sound was spot on. The band rose to the occasion brilliantly and whilst the audience were rather slow to respond, come Babylon's Burning, a fair portion of the crowd were singing along heartily. Towards the end of the set, Segs paid tribute to Wilko, saying that without him there would have been no British punk bands, which is true, no band did more to ignite the London music scene from which punk spewed than Dr Feelgood.

I headed to the bar at the end of the Ruts set in order to be mugged, the KOKO decor may have been old fashioned but the bar prices are bang up to date, you could almost say futuristic..... £4.80 for a can of Kronenburg!

The second unnerving of the night came in the form of five or six blokes at the bar each sporting an oversized Wilko mask! Great stuff.

Wilko's set was great, the expected mix of solo material interspersed with Feelgood classics. I suppose I have seen Wilko Johnson play about a dozen times now and I could stand and watch them a dozen more times (saly unlikely I know) because the combined visual spectacle of Wilko and Norman is such a treat..... you cannot stop yourself from smiling! 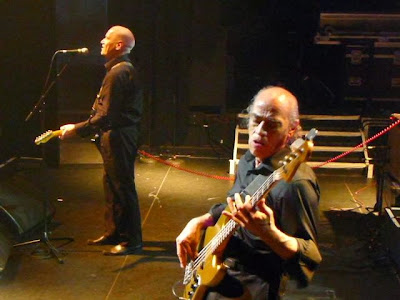 Wilko & Norman Koko, Camden Town
14th October 2013
Leigh emerged after the Ruts DC en-route to the bar, since a handful of celebrity liggers had rendered the backstage area as dry a desert! A few faces were to be seen during the gig though, a couple of members of.... The Members and Graham Coxon as I recall.

Wilko has even more recently guested on dates by Norman Watt-Roy & Friends (dates can be found on Wilko's website) but whether or not he is doing all I have no idea.