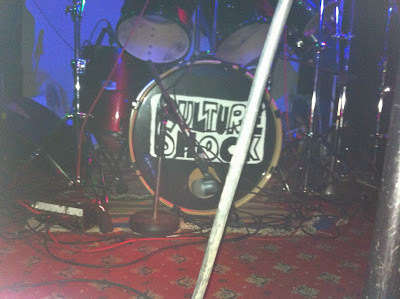 As indicated in an earlier post this was something that I was really looking forward to having missed the blighters first time around.

Strange venue (especially for a London comeback gig), but what the hell, this social club or what ever it was suited the occasion perfectly. On entering and making my was to the usual first stop, the bar (although increasingly these days it's the gents!), I noticed that vegan beer was being advertised, whilst out of the corner of my eye I could see a banner of The Hunt Saboteurs Association...... this was like stepping back in time 25 years - the only discernible difference was that now there were no Metropolitan Police vans parked up outside the venue full to bursting with constables eager to nick a few of those troublesome anarcheest types.

Another upside to the gig was that, whilst the vegan bitter did not appeal, cans of Tyskie lager were on offer for £2.40... a sharp contrast to the £4.80 charged in Koko five days earlier! I've paid less in hotel minibars!

First up were AOS3, with the ex- P.A.I.N. frontman on vocals, who played an excellent set of ska punk. Next up, and as keenly anticipated as Culture Shock themselves, were The Mob. I had their seminal album 'Let The Tribe Increase' in the '80s (now I have it on CD of course), but never got to see them as they called it a day in 1983 at around the time that I was cottoning onto this punk thing.

The Mob, with their original line up played an excellent set, two songs of which I videoed, incidentally the two opening tracks on the 'Tribe' album.


'Cry Of A Morning' and 'Another Day, Another Death' by The Mob
T-Chances, Tottenham 19th October 2013

With The Mob still ringing in my ears, it was time for a quick circuit of loo, bar (for another cheap one) and then stage front as Culture Shock took to the stage without drummer (who sauntered on about 10 minutes later). The set that followed threw me right back to student digs in the late '80's when Culture Shock's albums were rarely off the turntable.... they being one of the few bands where all residents found some common ground.

The heat was intense as Dick and Co. ploughed through a brilliant set of material as evidenced by the set list. 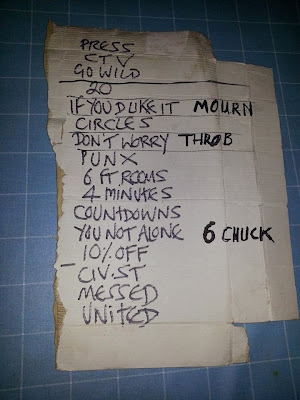 So there you have it, one of the gigs of the year, three excellent bands, cheap beer and all for the princely sum of £7. They were onto something these anarcho punks!
Posted by Musky03 at 14:11

Email ThisBlogThis!Share to TwitterShare to FacebookShare to Pinterest
Labels: 2013, Culture Shock, The Mob