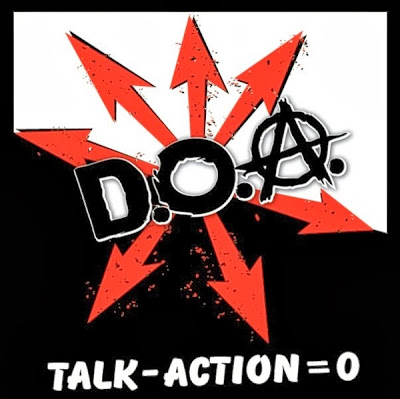 I first saw D.O.A. 23 years ago at the London School of Economics. By rights this should have been 28 years ago when the band rolled into Brighton to play the Richmond Hotel promoting their 'Let's Wreck The Party' album. As often happened it seems, mates went along and I didn't! I do however think that since first seeing them in 1990, I have caught them on each occasion that they have returned to these shores.

Tonight though was extra special, it being the farewell tour. Now I know that the 'farewell tour' is a proper rock 'n' roll cliche, but the fact that D.O.A. have been taking this farewell tour around the world throughout 2013 makes me think that this really is goodbye. Joe Keithly has his next steps planned in terms of entering the political arena in his native British Columbia standing as a New Democratic Party (NPD) candidate.

With the support bands dispatched, shortly after 10 pm we were treated to an hour or so of hardcore punk B.C style. Joe is a bear of a man who commands the stage completely. This was a real old school performance, with a constant stream of bodies hurling themselves off the stage as the band steamed through a set of D.O.A. classics...... 'America The Beutiful', 'Race Riot', 'Liar For Hire', Fucked Up Ronnie'.... as well as new tracks from their new (and it would appear final) album, 'We Come In Peace'.

A brilliant night and a fitting end to a great band. I wish Joe every success in his ongoing political adventure.

As for the new album, I am listening to it as I type these words and would strongly recommend it! The D.O.A. sound is stamped indelibly on each song, but stand out tracks include 'He's Got A Gun', 'Boneyard', 'We're Bloodied But Unbowed', 'We Occupy', with the very familiar vocals of long time D.O.A. collaborator, Jello Biafra, and 'Walk Through This World' which casts a very knowing nod in the direction of The Clash's 'Bankrobber'. 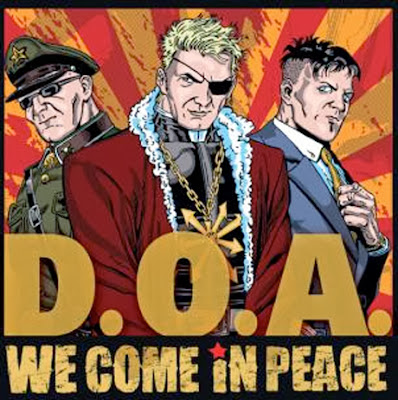 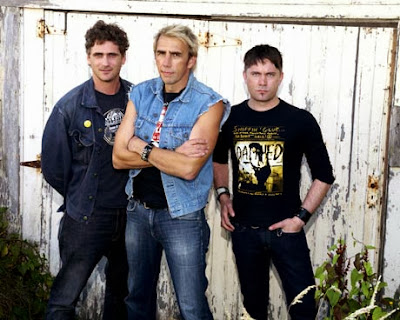 Email ThisBlogThis!Share to TwitterShare to FacebookShare to Pinterest
Labels: 2013, D.O.A.