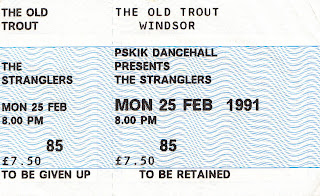 I knew I had this somewhere. Here's the review of Paul's first UK gig that appeared in Sounds the following week. It was written by a friend, Andy Peart, then on the paper's staff, who did ask for my opinion after the gig.... from memory I think it was me who mentioned an 'over the top' stage performance!