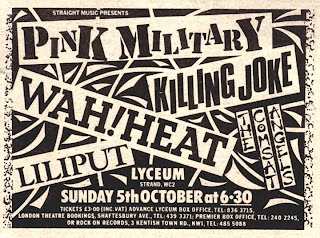 Following on from the first wave of the London punk scene, Killing Joke like many post-punk bands took the attitude and pace of punk, mixed it with all manner of other influences, and served it up as something completely new and for that reason exiting and dangerous once more!

The early singles were rather dub orientated, a reflection of the band's origins in the Ladbrook Grove area of West London. By the time their eponymous debut album was released, the band had created a tribal wall of sound of stunning intensity. Other bands of the day were also treading the tribal path (most notably the later Ants and Southern Death Cult), but all sounded tame in comparison with the noise being made by Jaz Coleman and his cohorts.

Here's a great quality early gig. Although short, this may be a full set recording given the number of band's playing and Killing Joke's positioning on the bill.

I suspect that the uptake of this gig may be high considering the great cross over fan appeal of Killing Joke and The Stranglers.

Also in the UK on this night: