Record Mirror conducted an interview with The Damned part way through (after their Manchester University show on the 21st November 1981) an extensive UK tour to promote the newly released Friday 13th EP. 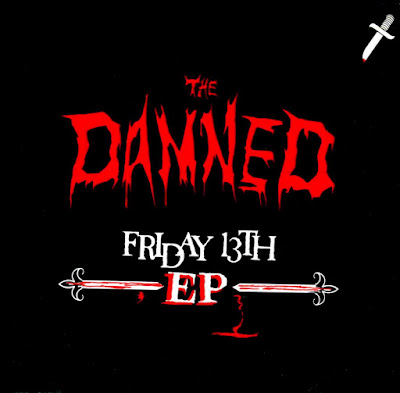 In the interview the band discuss their musical direction and psychedelia as well as talk about tinnitus, anarchy and autographs and a dislike of fame. In my opinion the Friday 13th EP is a perfect piece of vinyl serving as a great stepping stone from 'The Black Album' to 'Strawberries'. This was The Damned at their creative peak a couple of years before the slump. It was released on Friday 13th November 1981 as part of a one-off record deal with NEMS. Opening with 'Disco Man' then as now a staple in the live set, there follows 'The Limit Club' the band's heartfelt tribute to Malcolm Owen of the Ruts, who had succumbed to his heroin addition back in the summer of the previous year. On the flip side is the upbeat 'Billy Bad Breaks' and 'Citadel' a Jagger and Richards composition that suited them very well indeed. Inclusion of 'Citadel', a track that appeared on the Rolling Stones' 1967 album 'Their Satanic Majesties Request' is indicative of the confidence existing within The Damned at that time. To cover a song by one of the premier dinosaur band's that were in punk's cross-hairs five years earlier was rather a bold move. But as they are at great pains to say in the interview, “We’re not doing what they want us to do. We’re doing what we want to do.” 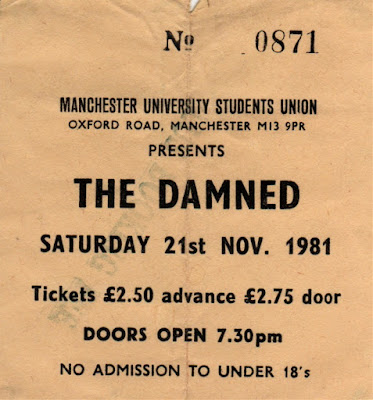 Squeezed into the shoebox sized dressing room backstage at Manchester University, are The Damned.

Rat Scabies (drums), Captain Sensible (guitar), Paul Gray (bass), Roman (keyboards for the tour) and Dave Vanian (vocals) majestically ghoulish as ever, sit pondering over the set and tuning up. Local fans stroll in. The band know them all by name. One lad starts strumming Damned numbers on the Captain’s guitar. He’s only heard the new record once, but he knows it already. The Captain assists, while another fan has his technique for playing the intro to ‘Happy….’ Improved on by Paul Gray.

This must be the positive punk effect.

The Damned are currently on an exhausting 23-date tour of Britain which leaves them a meagre two day break. Their Tony Mansfield (of New Muzik fame) produced ‘Friday 13th EP’ has recently been released by new label NEMS, and on December 20th, they headline the Christmas On Earth punk festival in Leeds.

The current show draws from the first, third and fourth albums, with nothing taken from ‘Music For Pleasure’. Watching The Damned tonight, it becomes perfectly clear just how much they have developed over their five year career, how much more than just a punk group they have now become, The audience, as usual, go absolutely nuts. 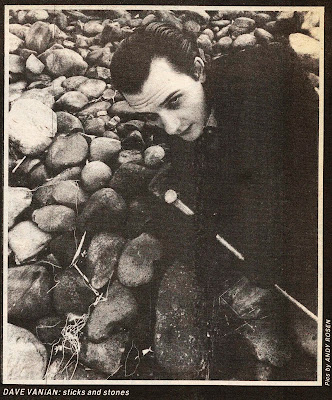 After two encores, during which audience over-enthusiasm sees a lighting rig come dangerously close to toppling over, the lights are switched on, and the shattered, sopping wet crowd file out, contented and invigorated.

Backstage afterwards, Rat Scabies isn’t happy about that lighting rig. “Never again am I going to do a student gig!” The rest agree. “So what did you think of the lights?” asks Rat with genuine interest.

The lights, which I’d seen earlier, are an interesting new addition to the band’s stage show. They involve groovy, colourful shapes and patterns, projected onto the screen or wall behind them. My rather pathetic reply to Rat’s question , to the effect that I thought the lights were pretty psychedelic, was greeted with howls of derisive laughter.

“Wrong word” says the phantom, with an evil leer.

A stream of adjectives describing the lights, follows swiftly.

I should have realised it was my imagination…. that The Damned go their own way regardless. Lights, concept albums – even slow songs are all part of them.

“The whole essence of the punk thing was to do whatever you want to do and fuck everyone else!” says Paul Gray. “We’re not doing what they want us to do. We’re doing what we want to do.”

Out of the university and onto the tour coach. And a very nice coach it is too. There’s a video, a small bar, and thankfully, a toilet. It seems that in the end, the extra cost for a few luxuries pays off. I for one was certainly grateful for it later on.

As we make our way to the hotel, the gig momentarily forgotten, the group start to worry about their hearing. The Captain’s ears are already damaged.

“The first thing that goes,” he says boisterously “is the top end, and then some of the middle, and then you start hearing just humming noises. When I’m in the studio, I have to tell the engineer ‘Don’t take no notice of me when I say put more treble on everything.’”

Have you ever thought of wearing earplugs like Ted Nugent does?

But enough, what about psychedelia? There is definitely, a distinct psychedelic flavour to some of The Damned’s music. Yet Rat seems surprised.

The Captain chips in: “Do you know where that comes from, all that stuff? It comes from four people’s minds, you know. We don’t do it consciously.”

Captain Sensible puts his feet up on the table in from of me. “The great thing about this band is we don’t follow trends. Although we get the punks to our gigs, and we enjoy their company, we don’t pander to their tastes.” Rat agrees. “That audience tonight, would have been happy if we just played the first album.”

With real passion in his voice, the Captain continues: “As far as people who are coming through, what we really would like is blacks, whites, skinheads, punks, hippies, morons…. And brain surgeons. Let ‘em all come!”And Rat: “You’d be surprised at the cross-section that do like us. You said earlier that there weren’t many punks at the gig compared to a London crowd. But even the London audience is getting like that now, getting more of a cross-section.”

But you can imagine The Damned appealing more to the straight ‘rock fan’ now?

“I like bleedin’ everyone!” replies the Capt. “Let ‘em all come, anyone!”Rat: “We’ve even got fans in the police. There were a couple at the hotel last night, and a couple in Camden too!”

Sensible: “There ain’t enough blacks coming to see us! I don’t know why, but there ain’t enough.” Rat and I argue that a lot might be scared of by the possibility of racial violence.

“Any of my audience who would lay one finger on a black man needs a kick in the gobhole!” Rat’s not so sure, “But you’re just resorting to the same things,” he says. The Captain is very worked up. “No I’m not! Let everybody come!”

Rat: “For me, The Damned are really doing a better social service than The Clash have ever done, in so much as we’re realistically bringing cross-sections together. It’s such an event being at a Damned gig, that there’s no time to worry who’s standing next to you. It takes that away.” While Sensible adds “Violence is disgraceful!”

With those familiar tell-tale signs of fast approaching nausea well established in my churning stomach, I listen rather quietly, as the talk turns to anarchy.

Captain Sensible: You get these kiddies coming up to you with ‘Anarchy’ tattooed on their arm right?And then they come up and ask for your autograph. So how much anarchy is there in asking for an autograph? Silly isn’t it? 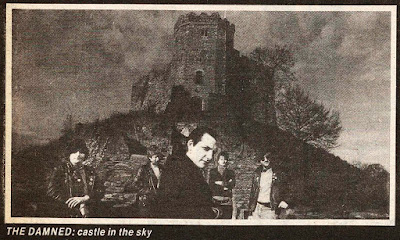 “But there was a time, when we first started, when no-one would ever say: ‘Oh, give us your jacket, give us your whatever.’ You know? People are missing the point.”

Rat: “Nobody would treat you like stars at one time. Now all I do is spend my time signing autographs. The point is, I would always make a point of going in bars, and I would always talk to the people who came to see us. You ought to try writing your name fifty or sixty times a night. I don’t want to be a star.”

The Captain continues: “The Exploited, Damned, Chron-Gen. We’re all stars now, but it’s not what it should be about. Punk was supposed to be a thing where everyone’s the same right? We’re the same as the audience, and if they don’t like us they won’t come to see us.”

And Rat adds: “Now it’s just like George Orwell. ‘Everybody’s equal, but the group are more equal than the rest.’ But the point is, if you don’t sign they think you’re a sod, and if you do sign… I always tell people I don’t like signing autographs, but what do you do? Upset the people that love you?”

“Anarchy and autographs. Is that what they want? You can’t have the two things! Don’t you agree?” says the Captain. On the point of no return, I meekly suggests that surely it depends on what they mean by anarchy. Surely punk anarchy is just a look. A non-violent revolt against society by your very appearance. Being ‘anarchy’.

Sensible replies: “Well it shouldn’t be, it can’t be. Anarchy’s anarchy!” Rat: “Anarchy is an ‘A’ in a circle that looks good.” It’s a wind-up in more ways than one. It works.

As I stumbled down the coach, two thoughts crossed my mind. The first was how contrary to the popular belief, The Damned are the friendliest bunch you could ever wish to meet. The other thought was how impressive it was to find a band as successful and talented as The Damned.

Email ThisBlogThis!Share to TwitterShare to FacebookShare to Pinterest
Labels: 1981, The Damned