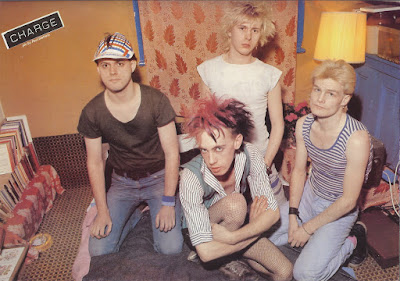 Following on from yesterdays Damned post a great supporter of this site over the years sent me the Charge, that night's support (in fact support for the whole tour) set from the same gig. Cheers!

Other than knowing the band's name I am completely unfamiliar with their stuff but a quick listen reveals a competent band that remind me on certain numbers of Theatre of Hate (maybe the vocal) - a band they also supported in their time.

Some further information on Charge can be found here in a piece written by their drummer on Stu, their singer and guitarist who passed away some years ago.

Email ThisBlogThis!Share to TwitterShare to FacebookShare to Pinterest
Labels: 1982, Charge