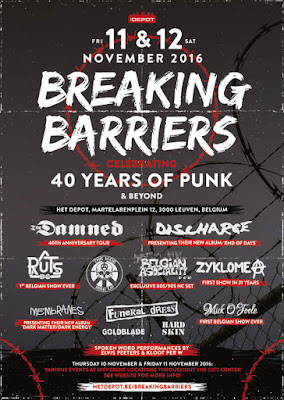 Well its been quite a year for those Ruts DC boys, a new rock album a good run of gigs and much high praise. The award of album of the year for 'Music Must Destroy' by UK alternative music magazine 'Vive Le Rock' was the icing on the cake.

There's no indication that 2017 is going to be any less busy for the band, with dates in Ireland preceding a national tour with some band called The Stranglers.

Here's a set that the band played at the 'Breaking Barriers' festival marking 40 years of punk in Belgium. Many thanks to the taper for sharing!