Cambridge Corn Exchange 17th November 2012 - Squeeze Redeem Themselves... and How! 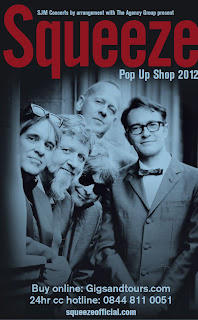 A few weeks ago, as part of the 20 from 80 series of posts, I included a gig by Squeeze. At that time, I commented that I found the experience less than enjoyable, despite loving their music. I also mentioned that I had tickets to see them play in Cambridge this month. That gig took place on Saturday night and I am happy to say that it was one of the best gigs that I have been to.

Every aspect of their set was near perfect, from the keyboard player (surely the bastard son of Ron Mael and Sean Locke!) who played out of his skin to the drummer, who was a joy to watch perform. All band members gave it their all I think.

All the hits were present and correct (they were really, really tight on the night) and even the new material ('Tommy' and 'Top of the Form') were excellent and worthy of the Squeeze label.

What ever happened on that night back in 1989, did not happen on Saturday. This gig was a celebration of the work of one of the best band's that Britain have produced.

Go and see them if you can.

Email ThisBlogThis!Share to TwitterShare to FacebookShare to Pinterest
Labels: 2012, Squeeze