In 1979, I achieved double figures (age-wise that is). It is also the year in which I started consciously to listen to music off my own back and to seek it out (the two Abba albums bought for me at Christmas several years earlier don't count in this narrative!).

If I can pinpoint a moment when the light bulb first illuminated it could well have been in the backroom of a pub called The Royal Oak in Sussex. Occasionally, I would accompany my parents to this country pub on a Sunday lunchtime and I would take the opportunity to play a game or two of pool with my Dad (dependent on whether 10ps were in hand). Along with a pool table, this back room also housed a thing of mystery.... a jukebox. These machines had held a fascination for me before  really knew what they were, simply because of how they operated. In 2012, when pubs have MP3 based machines that can hold 50,000 songs there is nothing to be seen. However, in 1979, jukeboxes were designed in such a way as to display  the mechanism and to show the transfer of the selected 7" vinyl from the 'library' to the player. 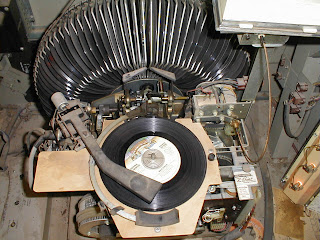 Anyway, it was one of these Sunday afternoon visits that was to give me my first hearing of contemporary music (that wasn't regular on Radio 2, as favoured by my parents). These songs I can recall as being Squeeze's 'Cool For Cats' and Tubeway Army's 'Are Friends Electric?', the latter track would date this to September 1979. These are two very distinctive tracks and both, in very different ways capture 1979 for me!

Up to this point, and since 1975 I suppose it must have been, my preoccupation was football and more specifically Stoke City. My first game was Brighton vs Stoke in the '76/'77 season (I lived 10 miles north of Brighton at this time). Bless him, for he wasn't to know, but my Dad took me into the North Stand of The Goldstone Ground which was the terrace for the Brighton faithful. The trouble here was that I was dressed in head to toe in red and sporting a Stoke rosette that was at least 1/4 of the size of me! As a consequence of my ostentatious display in favour of the away team a Brighton fan kicked me as I followed my Dad down the terrace to the front. Now I know that this doesn't exactly stand shoulder to shoulder with the worst excesses of 1970's British football hooliganism, but hey, this kid must have been about 14 and from a 7 year old's perspective that's a good as a grown up!

It was I think prior to the same fixture the following season that my Grandfather (the reason I selected Stoke to be my team) read in the local Brighton evening paper that expected to be on the bench the following Saturday was a 16-year old Adrian Heath. Now this would have been unremarkable were it not for my unusual middle name which happens to be Heath. It is my mother's maiden name and a common surname in Staffordshire.

The other Adrian Heath did not play on the day, but it was enough to kick-start a correspondence with Diane, the club secretary, that resulted in a series of letters and signed photos from 'Inchy' and culminated in a guided tour with him of the Victoria Ground with introductions to the team. This was prior to a game against Blackburn Rovers on the Easter weekend of 1978. 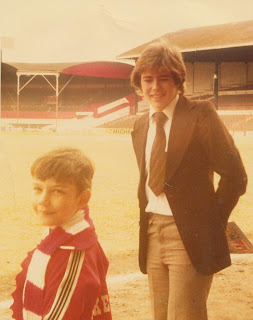 A couple of years later Adrian signed for Everton, two years after that Stoke went into a bit of a tailspin and my interest in he game started to peter out (it's not that I was a glory fan, I'm not sure that that term can be rightfully applied to a Stoke fan!), as any available funds were diverted away from Shoot! and football programmes to vinyl. 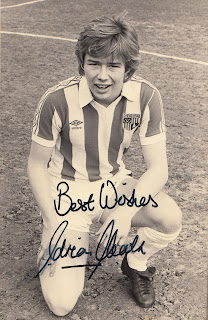 And so we have 1979, in my opinion the greatest year for music ever. Punk may have died on a San Francisco stage with the immortal words 'Ever get the feelin' you've been cheated?'. Or did it just mutate into something different but every bit as exiting. The bands that played the Red Cow and the Nashville had graduated to the Rainbow and Hammersmith Odeon having moved into a more conventional routine of working rock bands, but in so many cases the music was still as diverse and exiting as before. These bands could now play, were studio savvy and eager to build on early gained success.

If that wasn't enough, the next wave of musical herberts were also throwing their collective hats into the ring.

In short there was a wealth of great music coming from every concievable angle of influence.

My problem was that I was just a couple of yeas too young to get the full benefit of it (not least on the live side of things). Look through the gig-listings of any UK music weekly and it is clear that a Time Machine would be required to get to the half dozen or so must-see gigs that were being played across the country every single night!

So, by now you know the format, 20 from '79. I will try to have as many bands covered, but equally I have no qualms in putting up artists that also appear in the 1980 thread.

Please feel free to share any memories of '79 gigs that you had the pleasure (or courage in some cases) of attending.
Posted by Musky03 at 15:54

Email ThisBlogThis!Share to TwitterShare to FacebookShare to Pinterest
Labels: 1979