In preparing this upload, I notice that it has been posted elsewhere, so please accept my apologies, but what the hell, there's some additional artwork in it if nothing else.

In the absence of any performances from the band in 2000 on my shelf, I'll give this year over to the bass player. 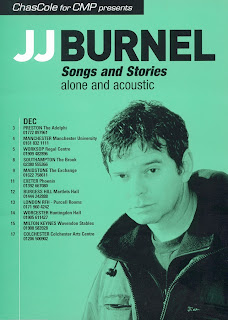 'Songs and Stories' Flyer
December 2000
This gig was rather unusual for me in terms of the venue. For those who don't know, Burgess Hill is my home town. I was born in the nearby community hospital and lived in Burgess Hill for my first 19 years before moving to London and college.

The venue was the Martlet's Hall, a small hall incorporated into the library building. Up until that time, I had never been to an event there. In fact the only 'gig' I recall taking place there was in 1987 (I think) when Sigue Sigue Sputnik, clearly on the way down (if ever they were that far up in the first place) played. This I missed as The Pogues were playing in Brighton on the night. The SSS gig ended in a big scrap, as such was the novelty of a name band appearing locally, a lot of gig novices turned up who, as is often the case, misinterpreted a bit of liveliness at the front as a fight waiting to happen and helped it along.

After SSS it was many years before the venue started taking bookings again, and these tended to be 60's acts such as Joe Brown & The Bruvvers and the like. So to have a 'hero' of mine playing in the local library made it worth the effort to travel down from Hertfordshire.

As I remember it was a filthy winter's evening. Driving conditions on the M25 and M23 were appauling (referenced by JJ in the set). Nevertheless, my expectations were high, this being a far more intimate setting for an 'alone and acoustic' set than the previous time I had seen him at the Union Chapel in Islington. The set that night was spot on, being a walk through JJ's entire career in music to date, with good representation of music from the solo albums 'Euroman Cometh' and 'Un Jour Parfait' and the Stranglers of course. This material was interspersed with new material that I thought was very strong. Did JJ ever take the new material from the stage into the studio? The only official release of many of these songs was from the SIS footage of the Union Chapel show. Even Hawkwind sneaked into the set.

At the end of the evening, whilst it was clear that Burgess Hill and JJ Burnel had ended their brief relationship that night never to see each other again, I left the venue content and headed for a curry with some old friends. 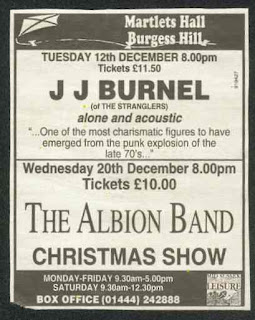 Full artwork here (pdfs are also included in the download file)
Front
Back
Posted by Musky03 at 10:05