West London Calling ‘No Justice’ by The Price 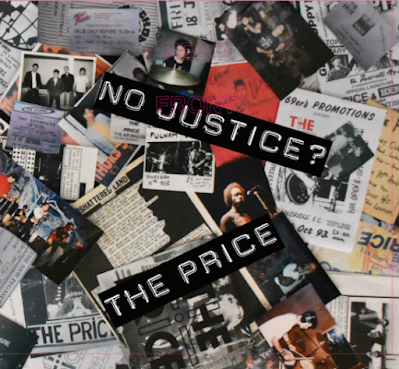 I cannot pinpoint the exact date when I first became acquainted with Leigh Heggarty, it really is lost in the mists of time. It was about 33 years ago, that much I can stand by and I am fairly confident that it would have been at The Angler’s Retreat pub in West Drayton. It could have been at one of his own gigs with The Price or maybe on the first occasion that I saw TV Smith’s forgotten outfit ‘Cheap’.

At that time, I sported a leather jacket on the back of which I had painted one of Steve Beaumont’s caricatures of JJ Burnel. Clearly this had earlier been spied at a gig somewhere in London as one morning in the centre of Uxbridge, a chap called Tony Clarke called me over for a chat having remembered the jacket. Tony was one of a group of Uxbridge area music fans that coalesced around this band called The Price. It is funny to think that 30 plus years down the line I have retained good friendships with as many people from the Uxbridge music scene, such as it was, as fellow students from Brunel University (the reason that I landed in Uxbridge for four years).

Since their original incarnation they have come back together on a number of occasions. I went back to The Angler’s Retreat to see them many years later as well as seeing them play a few times at the sorely missed Square in Harlow.

Now, all of these years later they are about to release their debut album. Entitled ‘No Justice’ it is a fine collection of 19 studio recordings from 1988 to 1993.

I do not think that I am doing the band a disservice when I say that whilst they came close they missed the break that several of their contemporaries such as The Senseless Things and Mega City Four enjoyed in the early 1990’s. This, as they would probably admit themselves, was in part an unwillingless to bow to record company expectations of how they should sound… an admirable stance I think for a guitar band to take in the musical climate of the day.

It is great to see that this material that meant so much to people in those miserable days of the late Thatcher era is finally getting a formal release.

And with that, here is more detail from the album’s press release:

33 1/3 years after they released their first single THE PRICE release their debut album ‘NO JUSTICE?’ on Cadiz Records cat. no. CADIZCD221 - nineteen studio recordings from 1988-1993.
The Price played hundreds of shows during this time, including support slots to Transvision Vamp, Carter The Unstoppable Sex Machine, The Lords Of The New Church, Wilko Johnson, Mega City Four, Senseless Things, John Otway and many more, as well as sharing the stage with contemporaries like Red Letter Day, The Newtown Neurotics, The Chairs, Action Pact, TV Smith’s Cheap, Who Moved The Ground?, The Shout and Porky The Poet (now better known as Phill Jupitus) among others.

They also toured the UK with The Lurkers and were one of the few bands to play in East Germany (including gigging in Leipzig and East Berlin and a recording session in Halle as well as supporting Half Japanese in Magdeburg and Cottbus) before The Wall came down.

The band appeared on a compilation album with The Manic Street Preachers (who they were booked to support but who got too big for the gig!) and their two 7” singles 'The Price You Pay' / 'The Man With The Smile' and 'So What About Love?' / Between The Lies' were both Single Of The Week in The NME and Sounds magazines.

BBC radio presenter Steve Lamacq was an early champion of the band, and ex-Ruts guitarist Paul Fox produced their second single ‘So What About Love?’ They also went on to work with famed and fabled producer Pip Williams who also produced Status Quo, Dr. Feelgood and more.
Although the band released a six-track mini-album ‘The Table Of Uncles’ in 1990 they were never able to release a full-length LP at the time, so this release collects together many of their best-loved songs in a long overdue overview of their career.

The album features the following tracks:

And the album is available to buy here: