A Brief Encounter With Punk Aristocracy 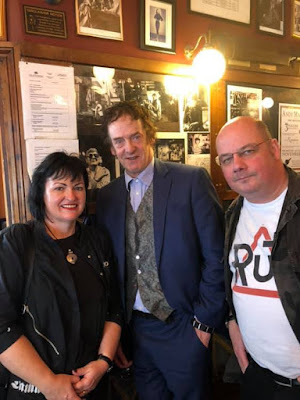 In a desperate attempt to avoid work for one day longer than most, Gunta and I arranged to do another of the amazing guided tours around London that are offered by the London Walks Company. On this occasion we chose to learn more about some of history and mystery of the London Underground. Two hours of enlightenment (even for us ex-London residents) passed in a flash, but lets face it exercise leads inevitably to a hostelry and so it was that we found ourselves in The French House in Soho's Dean Street. The pub is wonderful, a proper bastion of all that was and is wonderful about old Soho. I say last bastion as much of Soho has, in my opinion, been battered to hell by the Crossrail project.... so the continuation of these old establishments, be they pubs, restaurants or tailors is something to be celebrated.

So into The French House we ventured only to find ourselves positioned at the bar next to Edward Tudor-Pole. Having been at the Vive Le Rock awards last month over which Mr T-P officiated we engaged in conversation. It being the 23rd April, the Patron Saint's Day, the ethnicity of St. George was discussed amongst this select clutch of Tuesday afternoon drinkers. Be he Turkish, Syrian or whatever, I suggested that Ed should at least mark the occasion by wearing his crest and at least a token piece of armour, a breast plate or something. Next year Ed!
Posted by Musky03 at 20:37