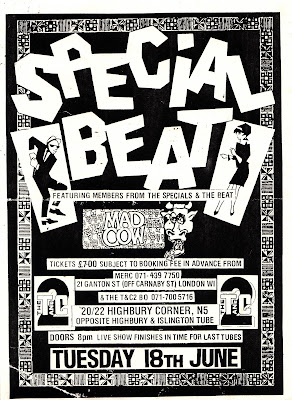 In the UK at least, the phenomenon that was 2 Tone imploded as The Specials bowed out with Ghost Town at the top of the UK singles chart (at a time when such thinks mattered) in the weeks that many of Britain's inner cities exploded with rational tension..... a validation of all that The Specials stood for and said. The big guns of the 2 Tone artillery evolved into different acts that followed a more pop friendly direction. Where the original message still existed it was conveyed in a more subtle manner than before.

Thus for those who were not old enough to enjoy the 2 Tone live experience, the emergence in the very early '90's of the Special Beat, a collective of original members of The Specials and The Beat was quite simply manna from heaven. As I recall there was a gig scheduled for Kentish Town's Town & Country Club that was pulled at the last minute, so the first opportunity that I got to see them was at the Garage in Highbury and Islington (then the T & C 2). Gunta and I met at the tube station, Gunta was nervous as she had been off that day with a bad cold and as her boss lived in the immediate area she was worried tat she would be spotted!

The gig was like nothing that I had witnessed before, the energy emanating from the stage was more infectious than Gunta's cold. The venue boiled as Neville Staple and Ranking Roger ripped their way through their band's back catalogues. The songs had not aged and sadly the messages they conveyed were still relevant over a decade since they were penned. Yes, Margaret Thatcher had resigned six month's earlier, replaced by the more palatable backroom boy, John Major but in 1991 and 1992 Britain was officially back in a recession, so things remained tough for so many.

Sadly, I do not have a recording of this gig (althogh I believe that the Special Beat Live alum was from this tour which caught the band at the Tic-Tok Club in Coventry).

However, here are the band in Boston in December 1990 (ignore file title in the download, this was my error).

Email ThisBlogThis!Share to TwitterShare to FacebookShare to Pinterest
Labels: 1990, The Special Beat