Here's something I haven't revisited for a while, although drinking in a Bishops Stortford pub recently with a regular visitor to the site it was commented on that perhaps this should be revived. Ever eager to please, I thought I'd give it a go, but this time with a challenging year for my collection....... 1984, not the best year in musical terms in my opinion.

For the majority of 1984 I was 15 years old and my musical taste was in some sort of transition. That year I saw Ultravox and Gary Numan in Brighton, but the music that my mates were playing was starting to get through to me. The previous year, our 'local' band Peter and the Test Tube Babies (they were Brighton based and we were 10 miles away in Burgess Hill) had released 'The Mating Sounds of South American Frogs' and this was a staple element in the musical diet in '83/'84. Likewise, I spent quite a lot of time around a mate's house listening to the Dead Kennedys' fine offering of 'Plastic Surgery Disasters' whilst trying to beat him at Trivial Pursuit (a relatively new things too at the time). 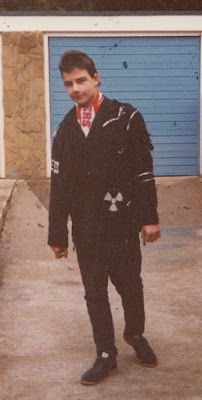 Those very same mates of mine all had significantly older siblings which meant that they enjoyed greater freedoms than I did as an only child. These freedoms included going to see bands in Brighton (The Subhumans, D.O.A. and The Test Tubes of course at the Richmond (Hotel)) and London (The Adicts and Toy Dolls at the 100 Club, Conflict at Woolwich Poly and The March Violets at Chelsea College). For a while yet I had to content myself with buying the records from Virgin Records, then on Queen's Road. The wonderful thing about many of the records I was amassing at the time was the 'Pay no more than....' label which allowed my limited budget to go quite far.

Email ThisBlogThis!Share to TwitterShare to FacebookShare to Pinterest
Labels: 1984