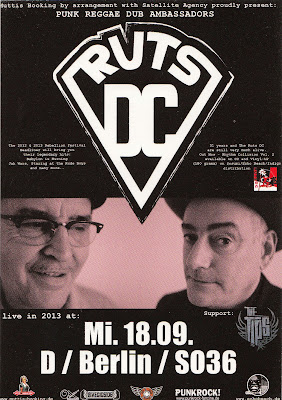 So to the main event of the Berlin trip. Ruts DC were playing at the famous SO36 club in the Kreuzberg district of Berlin. Heading out to the gig in the early evening we were conscious of the fact that the guidebooks seemed to indicate that this part of town was a little iffy and perhaps to be avoided at night. From what we saw, I dunno what all the fuss was about, I thought it was if anything rather bohemian and not unlike our own Camden Town. We missed the sound check (having fallen asleep in our hotel room after searching for some bedding (of a type particularly favoured in Germany as my wife told me). I know very punk rock indeed!

Whilst waiting for word from the Leigh (Guitarist of Ruts DC - he'll like that) that the band were back in the area, we ate lightly and drank heavily in a nearby bar. By this point I had switched to the old touring staple of Pinot Grigiot (you simply need to wee  less and so miss less of the gig!). Eventually Leigh calls and we rendevous in a pub just across the road from the venue for a beer and a chat. Leigh gave us the news that tonight was bound to be a bit different as keyboard and melodica maestro, Seamus, was not doing the German dates so some changes were necessary. 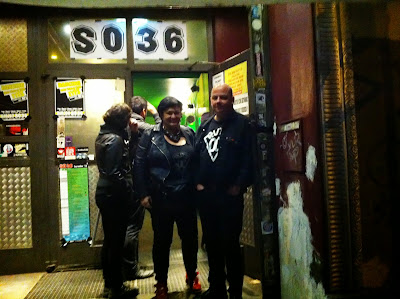 Adrian & Gunta at the Entrance to the SO36 Club
18th September 2013
So in the venue, skin duely stamped and with beer in hand I took in the venue. I was expecting a real dive, but it was no such thing, the place is great! On this occasion we broke with tradition and watched an unknown support band called The Tips from a place called Neuss (where apparently nothing EVER happens... that was the opinion of other Germans we were talking to, not us. Actually make that Germans that Gunta was talking to..... I just smiled sweetly). Their music was of the American ska punk variety which is fine if a little done to death, but their bass player was very good. Anyway, they were a worthy support act for Ruts DC.
Without ceremony, Ruts DC took to the stage and we're out of the blocks. Now I know that Segs had some misgivings about these dates as a result of the poor reception that the band received in some of their earliest dates. Like many, the German punks found it hard to accept the band without Malcolm, only more so! To my eyes, there were no such problems and no hostility, only smiling faces (we met some really great people at the front on the night) in a venue with a healthy volume of punters stretching out to the back of the venue. At least a turnout of 400.
The absense of Seamus was countered by extra effort from the Fab 4, with additional work for Molara in particular. The band pulled it off, no doubt about that. The night was a great success as evidenced by the enthusiasm of the audience to talk to the band post gig.
'Something That I Said'
SO36 Club, Berlin
18th September 2013 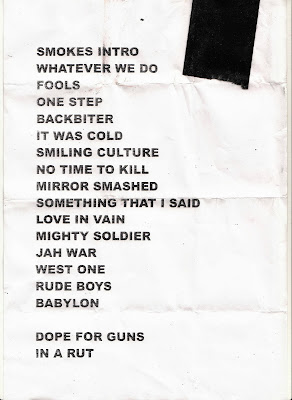 For more on the band's Teutonic adventure take a look at Leigh's account, here.
As always, thanks to Leigh, Segs, Ruffy and Molara for their hospitality and another great night out!﻿
﻿
﻿
﻿
﻿
Posted by Musky03 at 19:14