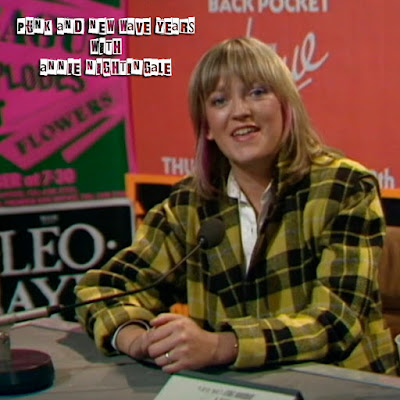 This is the first of two BBC 4 produced compilations featuring long standing Radio 1 DJ Annie Nightingale. In the first she showcases her favourite and most memorable moments from The Old Grey Whistle Test program. She took over as anchor of the long running music show in 1978. A mainstay of BBC televisions music programming throughout the decade, the show was essential viewing for the serious student of rock! With 'Whispering' Bob Harris at the helm, the OGWT took itself very seriously indeed and it earned its reputation of being pompous and staid at the same time.

Whatever the reason for the shake up, Annie Nightingale's arrival spelled great change for the Test. She was determined that under her stewardship the show would be a more realistic reflection of what was now occurring on the musical front in the UK and in 1978 that meant punk and new wave!

The program was turned on its head although initially it was not known whether the new bands would consent to appear on a show so closely associated with the dinosaur bands that punk looked to make extinct. Nevertheless, appear they did, the result being for the next five years or so the Old Grey Whistle Test gave us some of the finest and most memorable footage of many of 'our' bands in their prime.