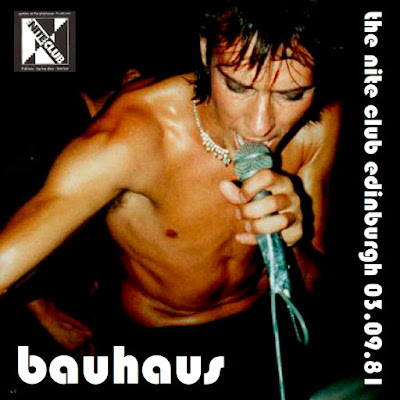 Ah, the undead of Northampton. Not everybody's cup of tea but I love them. Stuck in a twilight zone occupied by David Bowie and The Damned, Bauhaus carved a niche in the market for sure. Forget the Sisters of Mercy, Bauhaus were the ultimate band of the goth genre. The band were something of an enigma. On the face of it they took themselves very seriously indeed. They had a penchant for pretention.... a great example of this can be found on the sleeve notes to their 1981 album 'Mask'. Not their own words, but those of avant garde poet Brilburn Logue (a.k.a. Alan Moore, comic book writer, poet and fellow resident of Northampton):

'This is for when the radio is broken and crackles like uranium orchids
This is for when the fohn-wind rattles the telegraph wires like a handful of bones
This is for when dream ambulances skitter through the streets at midnight
This is for when you get caught in a sleep-riot and the sky is out of order
This is for when your sex is full of voodoo
This is for when your clothes are imaginary
This is for when your flesh creeps and never comes back.'
What's that all about then?
On the other hand there are the occasional glimpses of humour. The sinister sounding 'Spy in the Cab' is allegedly a song about tachographs that record the activity of long-distance lorry drivers.
'Hidden in the dashboard
The unseen mechanized eye
Under surveillance
The road is full of cats eyes
It's sick function to pry
The spy in the cab.'
I caught the tail end of the band, the singles 'Ziggy Stardust' and 'She's in Parties' were both big in my world. In fact at the time I used to boldly told friends that the Bauhaus version of 'Ziggy' was superior to the original.... a view that I have had the sense to abandon in the years that followed!
I saw then just the once in 1998 at Brixton Academy. In doing so I caused a long weekend holiday with friends to be cancelled, such was my desire to see Mr Murphy and the boys!
And they are back.... having played an extortionately expensive gig at Alexander Palace some months ago, some new material 'Drink The New Wine' and another Brixton gig is in the offing. 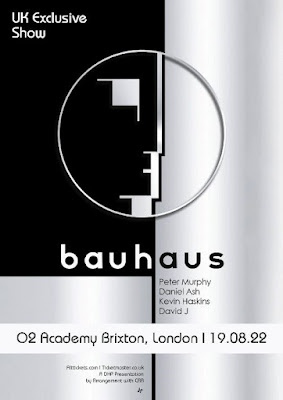 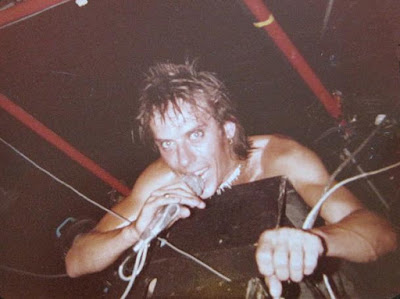 Email ThisBlogThis!Share to TwitterShare to FacebookShare to Pinterest
Labels: 1981, Bauhaus