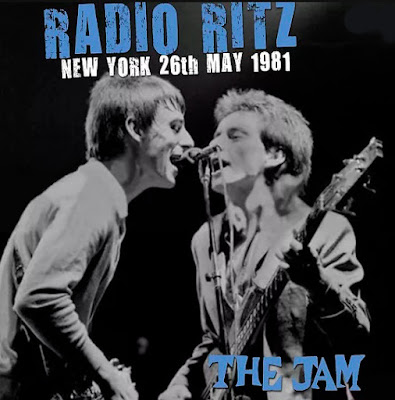 Kicking proceedings of then in a revisit to 1981 are The Jam with a full set radio broadcast of their gig at the Ritz in New York on 26th May 1981. At this time Weller & Co were at the top of their game being one of the biggest bands in the UK, perhaps The Police could have pipped them to that particular accolade but not by far. In the UK music press Paul Weller was viewed as musician/politician rolled into one.... A Minister of Yoof you could say. Sting never acquired that status. The Police on the other hand conquered the world which was something The Jam never achieved. Weller alludes to the problem in this recording in the introduction to 'Strange Town'..... 'Right, this is our bid for US success... this one's called 'Strange Zipcode'. Perhaps it was the accent, perhaps the fact that Selsey Bill or Bracklesham Bay were just too far removed from Time's Square or Sunset Strip. It seems that to break America you have to play by their rules and the music has to be palatable to US taste. The Police and certainly The Clash understood this, but Paul Weller refused to join in with that game. It's not that The Jam avoided American culture, they were very adept an making great American soul tunes their own but a gritty Britishness pervaded all of their albums and they were a better band for that.

So, with all that in mind, take a listen to this 'Sound Affects' period recording.

Email ThisBlogThis!Share to TwitterShare to FacebookShare to Pinterest
Labels: 1981, The Jam