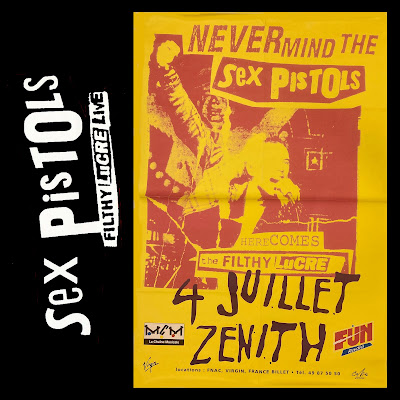 I have never really posted much Pistols stuff on here. Maybe that was because PiL always floated my boat more at the time as they were more contemporary to me! I only saw the band once at Finsbury Park (on the '96 Filthy Lucre our) and I have to say that it was brilliant. Today, Lydon seems to be courting controversy for controversy’s sake which for me has lessened the man somewhat. The recent legal case fought between Lydon  and Cook and Jones seems to be another rather sad fall out typical of the feuding rock stars of yor that the Sex Pistols made it their raison d'être to annihilate!
Sometimes, what with the force of nature that John Lydon/Rotten is it is difficult to remember that the Sex Pistols were a band, the power of the whole being greater than the individual parts (whilst recognizing that Rotten as a very visible front man was always gonna be the centre of the media and public’s attention). Each band member contributed to a whole and that band at the time shook up not just the music industry but the whole of society in ways that the Beatles and the Stones could only dream of. Like it not, regardless of who was playing first we owe the Sex Pistols a tremendous debt in fermenting a scene that became the soundtrack to our lives.