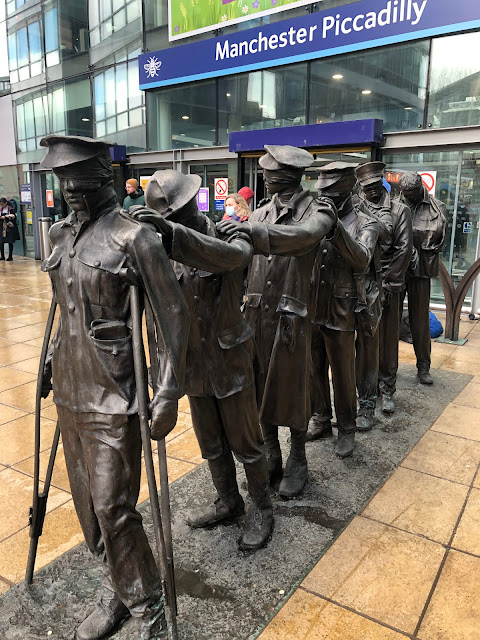 I have a huge interest in The Great War. Not from the perspective of grand strategies or successful or disastrous campaigns but from the human perspective, the impact that the war had on the men who fought (not forgetting those ‘Roses of No Man’s Land who did their upmost to save them in battlefield clearing stations and hospitals) and each and every combatants loved ones on the Home Front.

Men and boys thronged to any building that doubled up as a recruitment office in answer to the famous call by Lord Kitchener that all eligible men should step forward to do their bit for ‘King and Country’. Older men did just that to defend treasured British values and the principles of Empire. Young men stepped forward too, but their reasons to take the King’s shilling were in many cases far less jingoistic, rather a spell with the colours represented an opportunity to escape from the shackles of poverty, the hardships of factory existence or the drudgery of office working.

Regardless of the motives to enlist, the war was a great leveler and before too long, all soldiers, without regard of class or civilian status were exposed to the same hardships and horrors of modern warfare as experienced on the Western Front (as elsewhere). Of those shared horrors, a gas attack must have been one of the most feared and when it did happen it was one of the most horrendous of the brutalities meted out by either side. 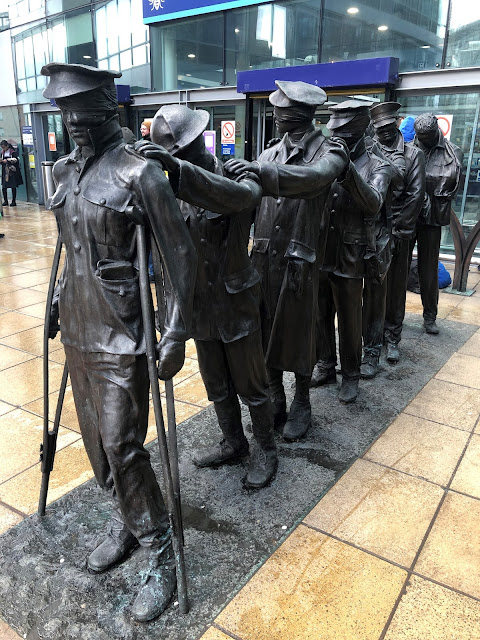 Leaping forward some 107 years, I made my way from Euston to Manchester Piccadilly to meet Mo for a Soft Cell anniversary gig at the O2 Academy in town. Stepping out from the station for the first time I was confronted by an extremely striking bronze sculpture. I promised myself to pay it more attention on my return…. but unfortunately poor organization on the day of the return journey resulted in a sprint past the sculpture in order to make the train back to London. On my next visit, I did make the time to see what it was all about… although I did have a good idea.

The sculpture is entitled ‘Victory Over Blindness’ by Cumbrian based artist Johanna Domke-Guyot. She pursued a degree in Fine art after receiving a devastating MS diagnosis in 1998 and her work presents her with difficulties related to the Multiple Sclerosis, including elements of visual impairment.

The final version of ‘Victory Over Blindness’ that now graces the entrance to Manchester Piccadilly Station was commissioned as part of the Great War centenary events, but prior to its unveiling in Manchester by the Countess of Wessex it had toured other venues in concrete rather than bonze form. 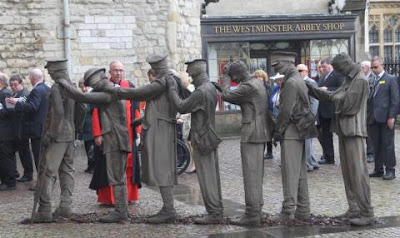 ‘Victory Over Blindness’ in concrete displayed at Westminster Abbey, London 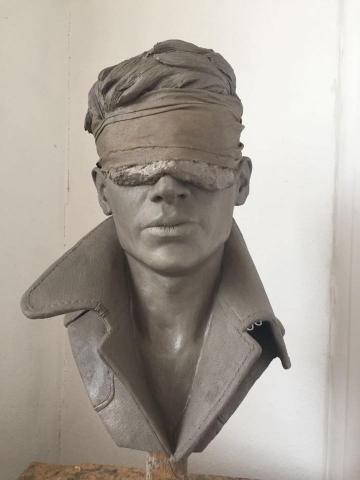 Study in wax for ‘Victory Over Blindness’

In its permanent Mancunian home it is accompanied by a plaque which states the following:

‘Victory Over Blindness
Johanna Domke-Guyot
Remembering the returning blind veterans
Of the First World War
More than 3,000 veterans lost their sight as a result of their service in the First World War. Making their way home from the front they began their journey to rebuild their lives after sight loss.
In 1915 a charity was founded to support them. Blind Veterans UK, formerly St. Dunstan’s has continued to support thousands more blind veterans to live independently as they begin that same journey today.’

The piece depicts a precession of seven wounded soldiers with injured eyes bandaged, each gripping the shoulder of the soldier in front. The sculpture is intentionally a three dimensional mirror of the famous ‘Gassed’ painting by John Singer Sargent. This huge, almost lifesize,  painting is housed in the Imperial War Museum in London. Sargent, an American war artist was commissioned to paint the piece based on his own experience. That experience came in the form if a German bombardment in August 1918 in the Arras sector in which mustard gas shells were used. Expose to mustard gas (1-Chloro-2-[(2 chloroethyl) sulfanyl]ethane to chemistry nerds…. I was one but had to look it up!) resulted in blindness, severe lung damage and blistering of exposed skin.

I struggle to imagine the fear that gas attacks instilled in front line soldiers. I could be talking nonsense here but at least a bullet or a high explosive shell offered the possibility (with no guarantees) of a quick and clean death. Gas offered no such thing, rather a painful and lingering demise.

Wilfred Owen perhaps made the best attempt describing the horrors of a gas attack in the English language in what must be one of the most damning pieces of writing concerning war, ‘In Dulce Decorum Est’:

'Bent double, like old beggars under sacks,
Knock-kneed, coughing like hags, we cursed through sludge,
Till on the haunting flares we turned our backs,
And towards our distant rest began to trudge.
Men marched asleep. Many had lost their boots,
But limped on, blood-shod. All went lame; all blind;
Drunk with fatigue; deaf even to the hoots
Of gas-shells dropping softly behind.
Gas! GAS! Quick, boys!—An ecstasy of fumbling
Fitting the clumsy helmets just in time,
But someone still was yelling out and stumbling
And flound’ring like a man in fire or lime.—
Dim through the misty panes and thick green light,
As under a green sea, I saw him drowning.
In all my dreams before my helpless sight,
He plunges at me, guttering, choking, drowning.
If in some smothering dreams, you too could pace
Behind the wagon that we flung him in,
And watch the white eyes writhing in his face,
His hanging face, like a devil’s sick of sin;
If you could hear, at every jolt, the blood
Come gargling from the froth-corrupted lungs,
Obscene as cancer, bitter as the cud
Of vile, incurable sores on innocent tongues,—
My friend, you would not tell with such high zest
To children ardent for some desperate glory,
The old Lie: Dulce et decorum est
Pro patria mori.'

The saddest thing of all is the fact that when I saw the ‘Victory Over Blindness’ monument and decided to write a piece on it online I was looking at it in terms of a memorial to the horrors of a bygone age, more than a hundred years distant from today. However, at the time of writing, March 2022, politicians are seriously discussing the possibility that Vladimir Putin could deploy chemical and biological weapons against Ukraine. I for one never thought that I would here such talk on such a scale. Sad times indeed.