British teen music magazine Smash Hits interviewed Hugh on the eve of the release of 'Aural Sculpture' The interview is scattered with biographical errors but given that by late 1984 the younger section of the record buying public were far more enamored with the likes of Duran Duran, Wham and Madonna that with four hoary old punks.

And they're called The Stranglers, in case you hadn't guessed. If you want to find out how to last 10 years in the pop music business without ever having to be nice to anybody, just read on…
By Mark Ellen
Hugh Cornwell is neither very young nor very fashionable and, quite frankly, he couldn't care less.
"It's what you do," he says, staring coldly across a table top, "not what you look like that matters. Shame people judge you on that."
He's simply not bothered. Why should he be? As he points out, there were people who considered him "ancient and antiquated" ten years ago, when The Stranglers first began steering their grim, determined passage through the shifting pop landscape, driven ever onward by "a complete and utter disgust for everything that was happening at the time"; ten long years in which they were to wear an awful lot of black clothes, wreck a few places and scare the living daylights out of a fair number of grown men and women, all in a merciless campaign to bring back "good music without any frills".
"We don't bother whether we're in favour or out of favour," he shrugs. "It makes no difference either way."
Well…it made a bit of a difference in 1974. Hugh was 24 then - so was pony-tailed keyboard player Dave Greenfield. French bassist Jean Jacques Burnel was 22 and stout, bearded drummer Jet Black was 27 - and nobody would give them a booking. So they hit on a system: Hugh would ring a pub and ask them what kind of bands they had playing there; If the answer was, say, "Country &  Western", the owner would shortly receive another call from a Mr Black who'd claim to be the drummer with a red-hot local Country & Western band and, chances are, Mr Black would be told to tum up on Thursday at 8 o'clock sharp.' Pretty weird sort of Country & Western band,' the owner would think to himself when confronted with four evil-looking characters all dressed in black, with a singer with a leather noose round his neck, calling themselves The Stranglers and playing harsh, sinewy songs about "rats" and "sewers" and being "on the end of a skewer". But by then it'd be too late. They'd be halfway through the set and let's face it - they didn't look like the sort of blokes to start arguing with anyway. 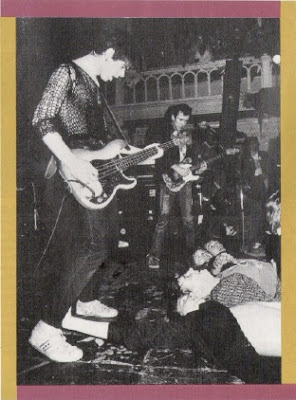 Jean Jacques and Hugh on stage back in '77
"we ended up a little belligerent."
Three years later, punk rock rolled around the corner. Bands like The Sex Pistols, The Clash, The Damned and Sham 69, much like The Stranglers, "laughed at the platform heels, the glitter and the showbiz" that was around at the time, and so the press-who'd completely ignored them for the last three years-suddenly found The Stranglers "acceptable". The trouble was, the other groups all thought they were just a bunch of old hippies trying to cash in on a bit of punk credibility and wouldn't touch them with a barge-pole.
"So we ended up feeling quite righteous because, on the one hand, we were rejecting what had come before, but everything that was new was rejecting us. So, obviously, we ended up a little…belligerent."
“Belligerent" is pitching it a bit low. For the next two years The Stranglers were to inflict the kind of treatment on unwanted people in their path that was nothing short of a fully-fledged reign of terror. Their concerts became spirited affairs: as they weren't as 'political' as the more image-conscious punk bands, their raw edge and dark humour attracted the kind of crowd who'd pogo dementedly, spit rather a lot and eventually collapse down the front in a steaming heap. Hell's Angels began to follow them about on tour, taking it upon themselves to 'poilce' the group's performances. This meant that if any delirious fan were daft enough to clamber onstage and get in the way, they'd be swiftly propelled back into the audience.
Once, in an exclusive Swedish hotel, Jet Black pulled the same sort of stunt on a waiter. On being told the kichen was closed, he promptly bunged the poor bloke through a glass window.
"Well, he was hungry." Is Hugh's defence ... and with Jet, hungry means angry." 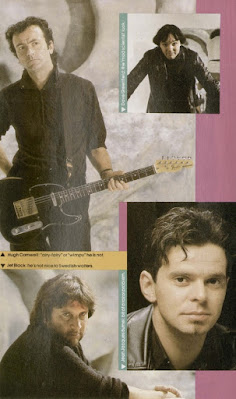 But it was the people in the press who were to suffer the worst. "We didn't know who to trust," says Hugh, and he certainly wasn’t taking any chances. They left one journalist tied to a tree in a remote section of the Spanish desert. Another was kidnapped in London, bundled into the back of a tour bus and eventually escaped nine hours later in Hemel Hempstead. One hapless Frenchman found himself gaffer-taped to the outside of an iron girder two thirds of the way up the Eiffel Tower.
In 1979 when the band played In Reykjavik, lceland, their record company flew a plane-load of trembling pop writers out after them so they could be either roundly insulted or completely ignored. All photos taken on the island- of the four Men in Black standing in front of acres of bleak volcanic rock – made the band seem all the more chilling and intimidating. Which was the whole idea of course.
But just as suddenly they were out of favour again. The moment the 2-Tone bandwagon pulled Into view, everyone turned their attention to groups like The Specials, Madness and the Selecter, and The Stranglers began to seem rather old fashioned and a bit tame. And by the time Duran Duran, Visage and Spandau Ballet arrivedln1981, The Stranglers had disappeared abroad and were making new friends in places like Australia and Japan. Which was probably no bad thing for all concerned, as Hugh declares the entire frilly blouse and lipstick movement to have been "a bit airy-fairy, wimpy and shmaltzy".
And he's not a lot kinder about the charts in 1984.
"People are attending more to the glamour of it than to the content. They're forgetting
what they originally used synthesisers for- which was to complement the song. The song is becoming the reason for the synthesizers in the same way as the video Is becoming the excuse for the song."
About all he has time for is Frankie GoesTo Hollywood'' - they've got balls"- and, perhaps more surprisingly, Culture Club.
"I was amazed a transvestite character could get on the cover of Woman magazine. That's great. If you can't take yourself lightly you've got no future at all. But the more you dress things up, the more drab it becomes. People end up being 'skin deep' without meaning to be," he adds, a reference to the group's current single. '''Skin Deep' is about, yes, superficiality. You encounter The Skin Deep in every walk of life." And the prime examples of 'The Skin Deep' for The Stranglers are, quite clearly, the poor souls who get sent to Interview them, though Hugh admits he's grow a little softer over the years.
"Then, we were always intimidating; now, we can be. People deserve what they get."
How would he explain the fact that he's lasted so long?
"I wouldn't attempt to. It's like asking Salvador Dali why he's the greatest living artist; he wouldn't be able to tell you. All I can say is, in the present lacklustre musical climate, the return of The Stranglers is like a nice, refreshing gust of bad breath."
He leans back, rather pleased with this last comment.
"At last," he says, "a dirty, horrible, unclean band have come back. Thank God!"