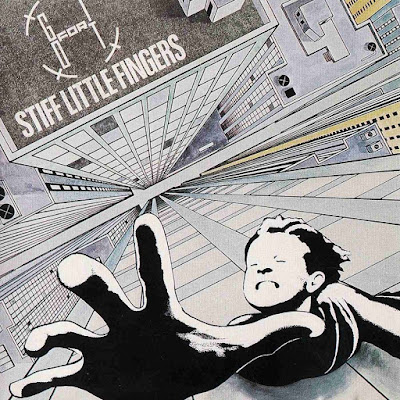 Yesterday marked 40 years to the day of the release of SLF's third studio album, 'Go For It'. It was an album that I first became familiar with via an airing on someone's Walkman whilst on a school field study trip in 1983... two years after its release. I was aware of the associated singles that had appeared on the never bettered 'All The Best' compilation, but there was so much more to the album.

At the time of its release in April 1981, the band had relocated from Belfast and had been residing in London for a couple of years. Whereas the first two albums had relied heavily, under co-conspirator Gordon Ogilvie's influence, on the band's experiences of growing up during 'The Troubles', 'Go For It' represented a considered move away from the world of barbed wire, armalites  and suspect devices towards the more regular experiences of young people living in London. To do so lessened the risk of the band being forever associated and defined by the terrible Irish situation.

The Belfast related songs that do appear on the album are very different in tone to any that had come before. If anything, the 'Belfast tunes' that cropped up on 'Go For It' yearned for Belfast, rather than turning a spotlight upon the day to day violence in the region that was still very much a part of life in 1981. Perhaps this was a natural reaction from four young men uprooted from a dangerous, yet familiar, place to a dangerous, albeit less so, unfamiliar metropolis. Henry's 'Gate 49' concerns the reassurance that comes with a return flight to Belfast (Gate 49 being the regular departure gate for the Heathrow to Belfast flight). Less light hearted is the song, based on a real incident, that describes how a friend of the band, or at least one of the band, was seriously assaulted and stabbed in London's West End, an attack that prompted the victim to return to Belfast in preference to taking his chances on the streets of London. The song, 'Piccadilly Circus' is for me the high point of a near perfect album.

The title track 'Go For It' is an instrumental classic that has for many years been the clarion call to the audience immediately prior to the band taking to the stage. Elsewhere on the album, less violent themes, although equally vexing, of relationship issues ('Just Fade Away') and wasted opportunities in the face of pressures to conform ('Safe As Houses') take the band in a new direction. Both of these topics would surface again in future singles and the band's last (pre-reformation) album.

As was the case with so many punk/new wave albums the album was brilliantly presented with artwork by the wonderfully talented John 'Teflon' Sims, at the time the house graphic designer with the Chrysalis label. Teflon was also responsible along with General Dammers for the iconic promotional and sleeve artwork that went with releases on 2 Tone Records.