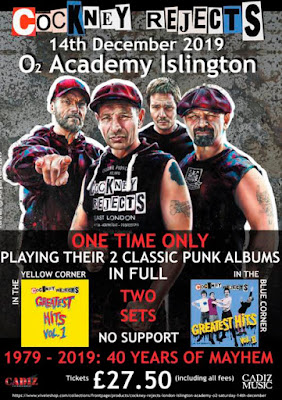 I surprised myself when I put together my nerdy 2019 gig list.... this was the third time that I had seen the Rejects this year! As the flyer above suggests this 40th anniversary gig was set to be something a bit different as the band were to play the brilliantly named 'Greatest Hits Vol. 1' and 'Greatest Hits Vol. 2' back to back.

Arriving early (so that Mo could get onto the barrier which is where she has decided she needs to be at gigs!) it looked fairly quiet right up to the point when the band were due to take the stage. Fill out though it did with a large number of mostly portly gents wearing claret and blue shirts topped off with Peaky Blinders caps..... sorry lads, but I just don't get those hats!

The gig was very well presented as each album set was preceded by 5 minute or so video projected onto a screen at the back of the stage in which each member said something about the songs and the making of each album and what was happening around the band at the time that each was recorded.

The Rejects made the decision to start the gig with 'Greatest Hits Vol. 2' as this was less familiar material to them with quite a few of the tracks having never been played live before. Certainly the standard Cockney Rejects set is mainly focused on the first album. By their own admission including 14 tracks on the album was over doing it a bit (albeit most run to around 2 minutes!) but this was due to pressure applied by E.M.I. to get more product out there whilst the band were riding high.

The set opened with an explosive 'War On The Terraces', a genuinely terrifying declaration of war for a Saturday afternoon back in the day when football violence was a feature in and around grounds in each of the UK's major cities. 'Urban Guerrilla' was played for the first time with Jeff 'Stinky' Turner at pains to point out the the song was recorded in the same studio as Queen's 'Bohemian Rhapsody'.... which wasn't as good.

'The Rocker' was a foretaste of the direction that the Rejects were to take later in the 1980's. Jeff admitted that the band were partial to a bit of metal of the right type, AC/DC's Bon Scott and Angus Young, early Ozzy and Lemmy were certainly musicians in bands that your average punk could admit to liking..... world's apart from the dreadful spandex clad, hair metal merchants that some like. 'The Rocker' was inspired by Lemmy.

How well I remember seeing the Rejects on their 'Top of The Pops' appearance performing/mining to 'The Greatest Cockney Rip Off'. I recall my Dad, never a fan of modern music briefly looking up at the TV, uttering 'Good God' and rolling his eyes!. Looking back on a YouTube clip of the show it features all of the best and worst that was Top of The Pops. As Sad Cafe's latest hit faded out the camera panned in on a 'trendy' Steve Wright who affected a piss poor cockerneee accent to introduce the Rejects who left the tank-topped gaggle of teenagers forced by the production team to stand in front of the stage and look interested. They didn't looked interested.... they looked confused and scared!

'Greatest Hits Vol. 2' drew to a close with the last notes of their cover of 'Blockbuster' and I think that all four members breathed an exhilarated sigh of relief that they had pulled the job off.

A 15 minute beer and piss break and a change into a dry gymnasium vest and the band were back on stage on more familiar territory that is 'Greatest Hits Vol. 1'. All the while I am straining my neck to make sure that Mo is still holding up.... fair play to her she is still on the barrier despite the onslaught of a now largely shirtless, sweating mass of males surging backwards and forwards in football/punk reverie! Where was I you may ask? Having had an operation on my right knee only on the Monday I figured that some distance between said knee and the front of the stage made good sense!

You've gotta love Volume 1! The Oi! that Garry Bushell championed in '79/'80 was neither musically sophisticated or ideologically sound (unless you are ICF or a Headhunter or a member of another such 'firm'). For my part I can't fight for shit and the idea of fighting in the street doesn't do it for me.... but crucial to me, as made very clear in the excellent documentary 'East End Babylon' the Rejects stood up against the elements of their audience that were British Movement and the Front! Respect! So long as you were happy to twat a willing rival in the South Bank it did not matter whether you were white, black or green. I can live with that I guess.


Throughout the evening song after song was introduced concerning the occasions when the young Geggus boys fell foul of the local constabulary.... so it was highly fitting when the two 'boys' brought their long suffering mum, Ma Geggus on to the stage. At 87 she looks marvellous given the hard time.....by their own admission I might add,  that Jeff and Mickey gave her in their youth! Regardless it is clear that family are all and the (Billy) bonds are there for all to see!

Middle of the set but the last one for me to mention is 'Bad Man', in my opinion the Rejects' finest moment (shared by Jeff I think). What a powerhouse of a song.

This was my last gig of the year and a great one to end on. My daughter ranks them in her top 10 of bands..... well, I am old and tend to change my mind from day to day, but I will say of them as would Stinky.... they really do give 110% when they play..... they love their audience and their audience love them..... all as it should be.

Happy 40th birthday to the Cockney Rejects...... 'You Ruddy 'Ooligans' as Warden Hodges may have said. 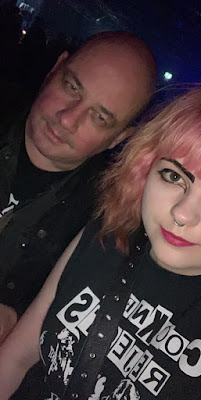