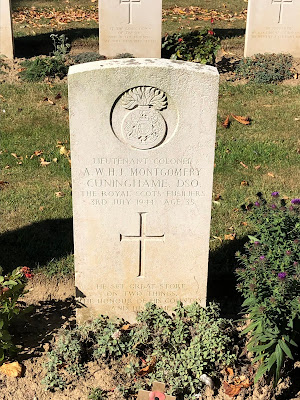 On a recent return trip to Normandy, we had reason to visit the Manvieu Military Cemetery for here lay the remains of a mate’s Grandfather and we had promised him that we would lay an RBL cross and photograph the headstone for him. With this promise honoured I took off on a customary amble amongst the headstones looking at the distribution of Regimental insignia that distinguish the otherwise uniform Portland stone headstones from each other. Given my Grandfather’s military service I have become rather adept at spotting from some distance those headstones that bear the Staffordshire knot or the somewhat compressed grenade of the Royal Scots Fusiliers (RSF).

Within the confines of the Manvieu Cemetery there are to be found several seems of RSF headstones and this really came as no surprise as the cemetery is located in the village of Cheux which lies approximately five kilometers from Fontenay-le-Pesnil. It was here in the last week of June that the 11th Battalion RSF, as part of the 49th (West Riding) Division (otherwise known as the ‘Polar Bears’, participated in ‘Operation Martlet’ which was intended to capture Rauray and Noyers Bocage to the South East of Caen, thereby protecting the right flank of VIII Corps who were about to launch the better known ‘Operation Epsom’. ‘Marlet’  pitched the Polar Bears against the armour of the Panzer Lehr Division and 12th SS Panzer Division Hitlerjugend, not to mention the fanaticism of their Panzergrenadiers! The fighting was bitter and was reflected in the casualty tallies on both sides.

The name on one grave jumped out at me, that of Lieutenant Colonel A.W. H. J. Montgomery Cuninghame, Commanding Officer of the 11th Battalion.

The Battalion’s War Diary for July 1944 records the circumstances of his death.

In the first days of July, the Battalion was engaged in regular artillery exchanges with the Germans, so called ‘stonks’ in army parlance. Late on 2nd July orders were received to establish a strong defensive position in the Fontenay area whilst enemy positions continued to be shelled. At 6.30 pm on 3rd July, the Division’s medium artillery registered on enemy occupied targets forward of the ‘C’ Company positions and as such they were to withdraw. However, in the planning, insufficient time had been allowed for digging in at the new position. Without slit trenches for cover, the men were left lying out in the open when the German artillery replied to the British bombardment. Resulting casualties were high in number. At 7.15 pm Lieutenant Colonel A.W. H. J. Montgomery Cuninghame was talking to the Officer in Command of ‘C’ Company when he was hit in the left shoulder and chest by a mortar splinter. The War Diary reported that ‘He died within half an hour at the RAP, apparently not in great pain but unable to breathe. His death came as a great shock to the whole Battalion, whom he had led with such force, determination and lion-hearted in the attack on Fontenay on 25th June, when his conduct was an inspiration to all.

At 3 pm on 4th July ‘Lt. Col Cuninghame was buried at the Calvary’. This was the site of the initial interment of all men of the Battalion who fell in the area of Juvigny and Fontenil-le-Pesnil’. The fallen soldiers were later reburied in the permanent CWGC Cemeteries in the surrounding areas. 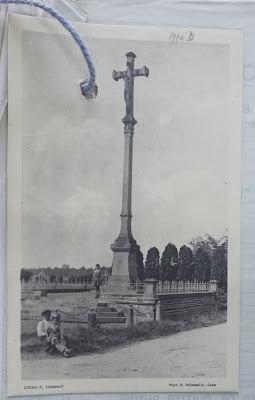 ‘Pioneer platoon made a coffin on which were placed his flag, belt and headdress’  (I think that this is transcribed correctly!). ‘As the Battalion was still engaged with the enemy, few were able to attend. Approximately 7 Officers and 40 OR’s of the Battalion attended and six officers attended as bearers’.
In his book ‘An’ It’s Called A Tam O’Shanter’ Fusilier Ken West described the forceful character of Lt. Col Montgomery Cuninghame, otherwise known as ‘Big Monty’.

‘As the name ‘Big Monty’ might imply, Lt.-Col. Montgomery-Cunningham was an awesome figure. Well over six feet tall and built like a giant, he was a forceful and thrusting leader of the Battalion.
He had been in command from the day that the 11th Battalion RSF had been formed in the small county of Rutland back in 1941, and had been the inspiration behind the training of this new unit which was now, three years later, a fighting battalion of the Polar Bear Division.

Of course, some of the methods he had formulated to attain the present discipline and dedication to the job in hand, had not always met with the instant approval of the rank and file.

Tales of Big Monty were being retold to those of us who had recently become members of the battalion as we huddled under any sort of cover from the incessant rain on this Saturday morning, the first day of July.

Back in the British Isles, Big Monty’s constant companions were his huge thumb-stick and his ever faithful dog Bruce. Both had played a part in his disciplinary application.

We heard how the large black dog would lay at the feet of his master as he conducted the daily CO’s orders. Many an unfortunate miscreant vowed that he had been sentenced by the dog and not by the CO, for on some occasions the CO would look at the dog and say “What shall we do with this laddie, eh Bruce?” then depending on how many times the dog wagged his tail, the fusilier would be given one day’s confined to barracks per wag.

Bruce himself was not spared his master’s wrath, for on the occasions when he cocked his leg against a signboard or happened to foul the pathway, he would be wheeled in on CO’s orders and given terms of CB, and would be tethered to the leg of the table in the guardroom for the requisite number of days. Revenge was thereby meted out by sly prods and flicks of the toe-end of an army boot belonging to some fusilier who had at some time patted the Colonel’s dog.

However, since the arrival of the Battalion on the twelfth of June on the invasion beaches, Big Monty had led them with courage and with complete disregard for his own safety. He had died as he set out to visit us at the wood. He was later awarded a posthumous DSO (Distinguished Service Order)’.

Here in the tranquil surroundings of the Manvieu Military Cemetery, the Commanding Offiecer lies flanked by two ordinary Fusiliers as here like in all of the other CWGC sites no consideration is given to rank and position within these extraordinary spaces. 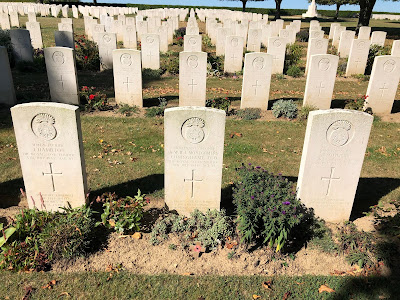