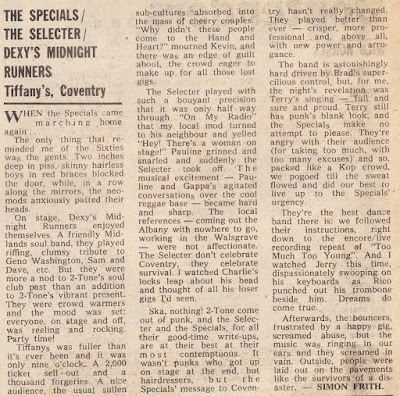 In December 1979,the now legendary 2 Tone Tour rolled into Coventry. It was a triumphant return to base when The Specials, The Selecter and Dexy's Midnight Runners (honorary 2 Toners) played a sold out gig and the venue in Coventry's city centre, Tiffany's, on 29th November. The gig was recorded, part of which, the so called 'Skinhead Symphony' (a trinity of ska covers, 'Longshot Kick De Bucket', 'Liquidator' and 'Skinhead Moonstomp', all of which had been roughed up Specials style) was to appear on the band's third single 'Too Much Too Young'.

The glowing review above appeared in the 8th December issue of Melody Maker, one of the UK music weeklies. 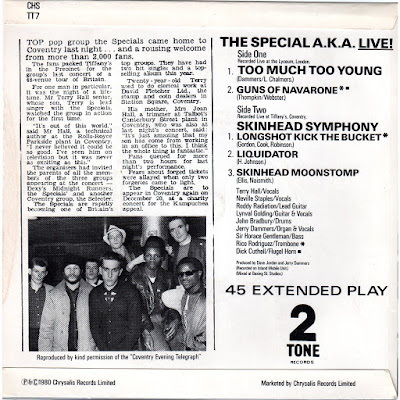 The iconic sleeve of 'Too Much Too Young' was put together by 2 Tone's resident graphic designer, John Sims a.k.a. 'Telflon'. A thoroughly nice chap and now based in Kent, I had the opportunity to discuss this sleeve with the man the day after a Specials gig in Margate where he had set up his Art of 2 Tone pop up exhibition. The exhibition featured the original cut and paste drafts of many off the pieces that he put together with Jerry Dammers. In my opinion, these works in progress are as beautiful as the final output! With regards to the 'TMTY' sleeve, there is an obvious addition, that has been cleverly, but noticeably, inserted. A grinning skin, who was not in the original shot. This individual was an early follower of the band and was added to the image as a thank you at the specific request of Jerry.

More examples of Teflon's 2 Tone related work can be seen on his website: 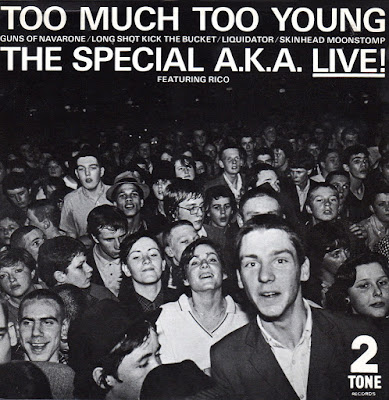 Email ThisBlogThis!Share to TwitterShare to FacebookShare to Pinterest
Labels: 1979, Dexys Midnight Runners, The Selecter, The Specials