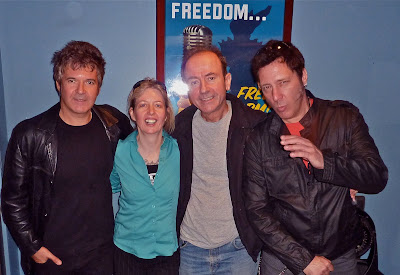 Clem Burke, Hugh Cornwell and Steve Lawrence
Live at WFMU on Diane's Kamikaze Fun Machine, October 2010
Here's a little gem that I stumbled across this morning on the net (here).
From the site, here's the blurb:

Diane is ecstatic to welcome the legendary Hugh Cornwell to the Fun Machine. Front man for the Stranglers for years, he's currently touring with his all star band featuring drummer Clem Burke (Blondie, Romantics) and bassist Steve Fishman (James White and the Blacks). They'll be playing a few live numbers in the studio and then Diane will speak about music with the punk icon! His latest release is a double CD called "New Songs for King Kong," on the Invisible Hands Music label. On this tour, Hugh played 2 sets -- a mix of his solo work and Stranglers songs, followed by a performance of "Rattus Norvegicus IV", the Stranglers first album in its entirety.