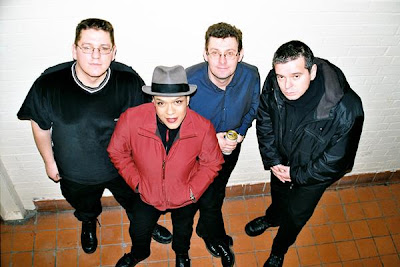 Rock 'n' Roll is a funny business and this was a rather funny idea. The musicians above whilst contemporaries represented two of the biggest musical scenes of the late '70s, namely 2 Tone and punk. This was indeed the reasoning behind the creation of 3 Men & Black, a project with a fluid line up anchored around The Selecter's Pauline Black that played together between 2001 and 2007. The line up above was the first incarnation of this little collective, later versions would include members of The Jam, The Beat, The Specials and even The Bay City Rollers!

JJ's involvement I presume came of the back of the 'Songs and Stories' stuff that he was doing in 2000, the 3 Men & Black project has a similar feel.

So here is a recording from Liverpool (anyone recall the venue) from 2003. many thanks to Meanie for this recording.