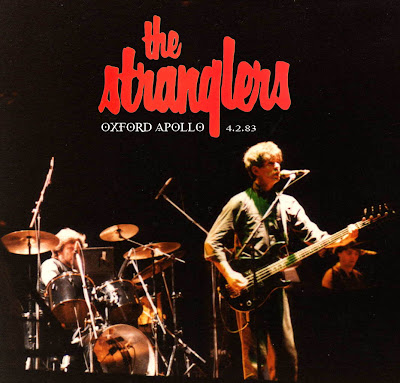 Here's one for my good friend Owen for whom this was his Year Zero moment. I give you his thoughts, in his own words, on this date and what followed.

'Exactly 30 ago today I lost my gig-going virginity to a certain black clad band at Oxford Apollo at the tender age of 15. I can still remember every detail of my introduction to the world of live concerts all these years later. It was the beginning of a long journey with The Stranglers which has taken me the length and breadth of the British Isles. It's also given me a reason to travel all over Eu...rope from Norway to Greece & Portugal to Yugoslavia, clocking up a fair few gigs over the years. Along the way, I've had numerous touring partners, some of whom are still active and some that have fallen by the wayside (and one who I've lived with for 20+ years!). Here's some of my fellow fans that I've been priviledged to travel with: Jacquie (obviously), Dave H & Sean T, Stevie T, Graham C, Gary B, Glenn S, Carl D, Wig, Paul C, Paul B, Ade & Gunta, Danny B, Scots John, Pud, Jacko, Dave from York, Dom P, Phil C, Baz C, Tony R, Paul K, Graham K, Bez, Karen, Paul W, Neil H, Simon & Joni, Baz S, Jim BUT, Deek & Graham, Dara A, Gary R, Raj, Jim R, Paul McG, Marian, Marcel & the Dutch, Uli & Gerd and a horde of Wonky busers and other gig goers! Thanks must go to the band (in whichever form), the management and crew (notably Gaz K, Bill T, Sil, Max, Bruce, Colin, Louie) who've helped to make the journey possible. Here's to many more gigs following the one and only Stranglers...See you in March for the next round...'