At the time of the miner's strike in 1984 I was 15 year old. In the same year the Provisional IRA detonated a bomb in the Grand Hotel in Brighton, home to the Tory party for the duration of their annual conference at the Brighton Centre. As a Sussex schoolboy at the time, it was pretty heady and exiting stuff. I was extremely jealous of another pupil that I knew, who at the time was in the middle of a week of work experience at The Evening Argus (the daily evening paper for the Brighton area) who suprisingly was taken along to witness the reporting of the biggest news story of the day.

This was the background against which I started getting into music that was much more overtly political. Don't get me wrong, for me like many others, a big part of my political eduction came from Spitting Image! But, really that's a serious point as back then due to that programme I was familiar with the cabinet and the Shadow Cabinet, whereas now I would struggle to tell you the names in the former. With familiarity (as well as contempt!) came interest in what these people were saying.

Crass had just honoured their intention to split in 1984 and in their wake were a collection of similar anarcho bands. The marvellous thing about the anarcho scene was that the records were so cheap at a time when an album would cost as much as a CD today (prices for CDs/DVDs has dropped a great deal in the past few years). The term 'Pay no more than...' was the order of the day. Many such bands played the Richmond Hotel in Brighton which was great, but I could only take aboard so much of that particular political message.

It was the 'Aggitate, Educate and Organise' message conveyed by the likes of Billy Bragg, The Newtown Neurotics and ranting poet Atilla the Stockbroker that struck a more powerful chord in me. They played in Brighton too. Luckily, I missed the Neurotics and Atilla gig at the Richmond with right wing skins from Crawley caused chaos. However, I did see them early the following year and several times after that up to their final gig at the Fulham Greyhound in 1988.

Since 2006 they have sporadically done dates, but over time the line up has changed and now guitarist and vocalist Steve Drewitt is the sole original member. As much as I loved them, the idea of seeing them with only one original member backed by hired hands was a real turn-off. Nevertheless, a couple of weeks ago a gig at The Square was billed as a celebtration of the debut album 'Beggars Can Be Choosers' with lighting done by the ex-Clash lighting engineer. I have to admit, that I saw nothing astounding in the lights, but to hear those songs again so many years on was fantastic. As is the case with The Specials, 30 years on, the songs are still spot on and sadly all to relevant to the political and economic situation Britain finds itself in in 2011 (check out 'Suzi', dealing with love over the CB radio airwaves and riots! ... it's a classic). On the night, the gig was nazi-free and people dispersed after a rousing chorus of 'Kick Out the Tories'. 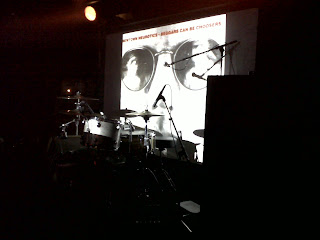 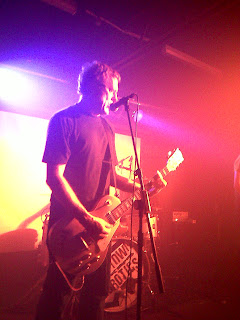 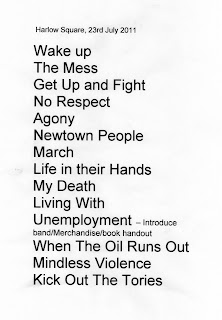 Here's a pre-reformation short set that the band played in 2004 as part of a celebration of the Stortbeat scene of the late 70's/early 80's... short but sweet!

1. Licencing Hours
2. Hypercrite
3. You Said No
4. When the Oil Runs Out
5. Blitzkrieg Bop

Email ThisBlogThis!Share to TwitterShare to FacebookShare to Pinterest
Labels: The Newtown Neurotics