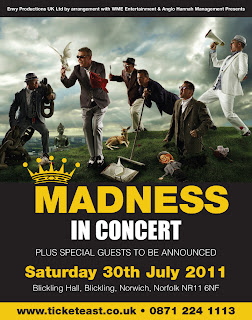 Not a usual gig for me this one. Rather, this was for the benefit of my daughter who has stated that Madness were her favourite band. When the alternative could be Justin Beiber, I can live with Madness. I had previously seen them with Ian Dury on their second Madstock outing in the early '90s, but a festival environment (so good for the kids) and a support from Neville Staple convinced us to make the effort.

About 12 miles out of Norwich the first challenge was to negociate our way around the appauling one way system in that city. We have got lost on each and every occasion in this attempt, but the one time I attempted to ask for directions, the accent of my would be guide was so thick that I could only thank her and leave none the wiser!

Eventually reaching the stately pile that is Bickling Hall, I was very pissed off to be charged £5 in order to park up in a field half a mile from the stage. Given the remote location of the venue it was not as though there was a choice in the matter! 3,000+ cars sounds at £5 each sounds like a good scam to me!

It being Ramona's day we got her a One Step Beyond shirt and a fez. Add to this a carton of chow mein and we had a recipe for a very happy young lady! 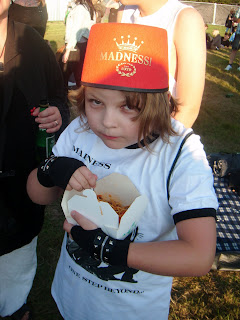 We caught last of the first support, a band called Missing Andy. They were a new name to me, but known to Rudi (I understand that they won one of the ubiquitous TV talent shows). Despite all that I thought they were quite good, perhaps a hybrid of The Streets and the Jam.

Next on the bill was the irrepressible Neville Staple. Now at this point I was rather concerned that having seen the Specials recently, this time around there was a risk that Nev could come across as a bit of a Specials tribute act. In the event, this proved not to be the case, with both he and his band being on top form. What was alarming was the occasions when he slipped into a cockney accent, unusual for someone with such a strong Cov accent! 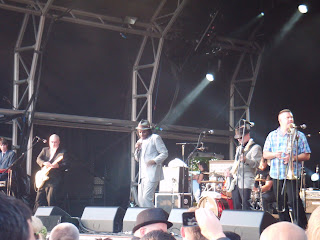 Neville Staple
Blickling Hall 30th July 2011
So then, Madness. I was always a bit of a fan (singles were affordable to someone on a pocket money budget and Madness are one of our greatest singles bands) and I did enjoy the gig, especially when they played, It Must Be Love, it being Ramona's favourite song. They were however uncharacteristically sloppy in some points of the set. Moreover, Madness have always struck me as a band with menace, maybe it's a gang mentality (much like the Stranglers I suppose) but that edge seeps into their audience and their were quite a few fights here and there. I must say that this was the drunkest audience I have seen since an '80s Pogues crowd! Rather worrying given the aforementioned 3,000 cars in the next field!

Overall verdict, a great day out, confirmation of how lucky we were with the music that we had in the late '70s/early '80s and a good warm up for the handful of Specials gigs I'm going in September and November.