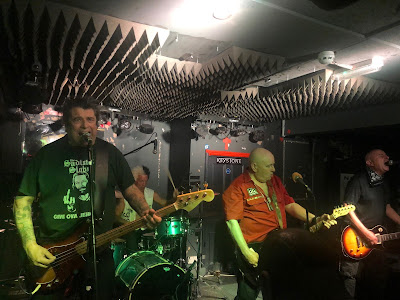 Well, it was a long time coming but 999's 'Glorious Return To The Roots' finally took root at the weekend when the band headlined two nights at the iconic Hope & Anchor pub. Located in Islington's Upper Street, for those that don't know (and there can't be many of those in the UK at least) this Victorian edifice occupies a hallowed space within the history of the London punk scene and The Stranglers. 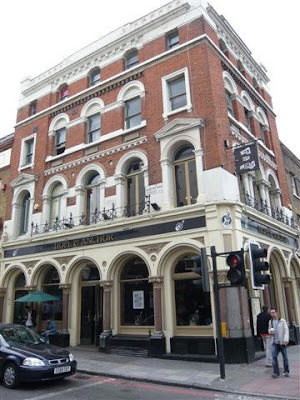 In the mid-1970's, a chap called Fred Grainger (he who is name checked in 'Bitching' an autobiographical track that looked back on the formative years of the band, then struggling to get bookings.... 'Why can't you all be like a Grainger man?') and Dave Robinson (who along with Jake Riviera founded the ground breaking Stiff Records label) put on rock bands in the basement. The bands in favour coalesced around the so-called 'Pub Rock' scene, a London centric marriage of several of the city's breweries and their tied pubs which created a  circuit that could keep bands active in the capital seven nights a week.

Throughout November and December 1977 the Hope hosted the 'Front Row Festival', an event that was something of a watershed for the UK music scene. It was a musical changing of the guard as the older pub rockers made way for a younger (in most cases!) breed of musician. The seminal double live album of the same name, capturing highlights of the festival gigs, features acts such as The Tyla Gang, Roogalator and The Pirates along side The Stranglers, X-Ray Spex , XTC and 999, all in the ascendant by the end of that incredible year.

The tiny basement continued to play host to a multitude of bands as their careers transitioned from the club circuit to the ballrooms of Britain.

This gig would have been quite special I think to Nick, Guy and Arturo. In the bar Guy told me that they had last played the venue in 1977. I cannot verify that but I do know that 999 received regular billing there that year. Nick's history with the venue would go back a few years still as Kilburn and the High Roads were regular visitors pre-1976.

It must evoke a strange sensation to return to a space that you last played in 40 years or more years ago. OK, so the basement has been knocked about a bit since then. The stage for one thing is at a different end of the room. But the space dictates the atmosphere and of space it can be reasonably stated that there is not a great deal of it! One positive change since the last time I was there has been the installation of air conditioning, not a small consideration in the week in which the UK recorded its highest ever temperatures! 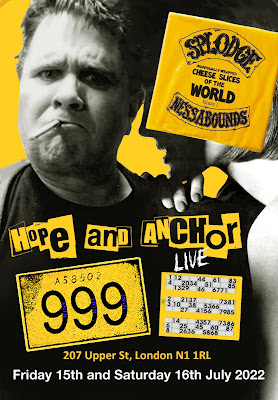 Up first were the irrepressible Splodge. We missed most of their set as we were still in the bar discussing the merits of Radio 4 with one of their comedy writers who had travelled down from Edinburgh for the gig. Not very punk I know! We did catch 'Mongols on the Streets of London' and '2 Pints of Lager....' that closed the set.

As has been the case for many years now, 999 opened the set with 'Black Flowers For The Bride' from the sublime 'You, Us, It' album. Never seen to be standing still, next on the agenda was 'Shoot' taken from their 11th studio album 'Bish, Bash, Bosh' from 2020. From the outset and as usual the pace of the gig did not flag as one high energy favourite collided with the next. This is no meagre feat for a band with as many years of gigging as 999 have racked up. As mentioned earlier, Nick Cash's live career goes back into the early 1970's. Nick's frantic vocal is perfectly complemented by Guy's highly accomplished playing and Arturo's punching bass lines, not forgetting Stuart's solid drums.

For me, highlights of a 999 set tend to be those tracks lifted from the two early '80's albums 'The Biggest Prize In Sport' and 'Concrete', a period when the band enjoyed some significant success (through sheer hard graft) in the US. Songs like 'Inside Out', 'Boys In The Gang' and 'Don't You Know I Need You' do it for me as much as the punk classics such as 'I'm Alive', 'Emergency' and of course 'Homicide'. An hour's reverie concluded with the first single 'I'm Alive', and what a place to declare it almost 46 years after the band formed! 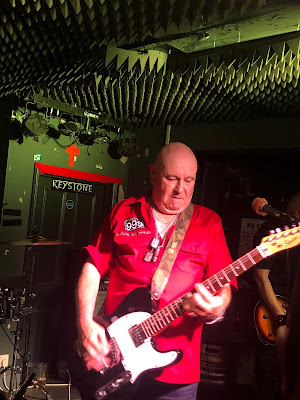 Unfortunately, we were unable to attend the following night's gig due to other commitments in deepest, darkest Cambridgeshire, but I look forward to seeing 999 again in the coming months.

Email ThisBlogThis!Share to TwitterShare to FacebookShare to Pinterest
Labels: 2022, 999