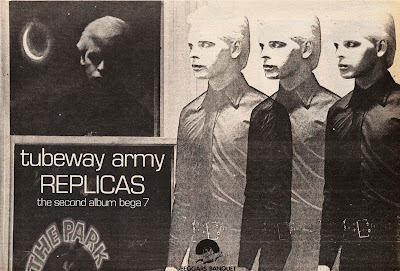 I have read recently on some Numan fan facebook pages heated discussion about the virtues or lack of virtues of the 'Intruder' album. Interesting stuff and completely understandable. To like everything an artist has done over such a long career is in my opinion a near impossibility. For my part I stopped buying Numan's albums after 'Metal Rhythm' and only picked up on him again with the release of the back to form 'Sacrifice'.

However, in 'Replicas' I think that we have an album that all fans, old and new can be aligned on. As Tubeway Army's breakthrough album it has withstood the test of time and remains a classic album of the post-punk era (that is not to say that it is 'post punk').

I find 'Tubeway Army' or the 'Blue Album' difficult to separate from 'Replicas', the former being the awkward teenage brother of 'Replicas', its 20-something, ever so slightly more worldly older sibling. The dystopian bleakness of 'Tubeway Army' is carried through onto the next album, minus young Gary's obsession with  knocking one out left, right and centre across the tracks of the band's debut!

As much as I love 'Tubeway Army' on  their second album Gary appears to have a firmer hand on the synthesiser reins. Some of the electronic sounds on 'TA' sound rather clumsy when compared to the more measured electronic creations that followed, from the fairly minimalist 'Replicas' to the phenomenal wall of sound that made 'Are 'Friends' Electric? such ground breaking tracks.

One thing that I love about the album is that, for me, it is one of the most evocative albums in my rather large collection. In this sense I mean that when I hear the opening bars of say 'It Must have Been Years' I am not just thrust into the grimy lamp lit bedroom of Numan's imagination, I am propelled back to my own teenage bedroom, the one with a 5 foot Tubeway Army logo painted on the wall. That room wasn't quite as bleak as the one in the parallel universe of 'Replicas' (although as it was a badly built, badly insulated dormer extension to my parent's bungalow, it was only a rather pungent smelling oil radiator that melted the ice that formed up on the inside of the single pane windows!).

'Replicas' was a powerful statement of intent from the soon to be 'solo' Numan and great things followed in the form of 'The Pleasure Principle'. As a huge fan of Tubeway Army, the 1983/1984 period were about as good as it got, with the earlier release of the first two singles plus 'We Are So Fragile' on a 12" compilation followed by the more exiting red and blue compilations that contained genuinely unheard material... including three additional tracks dating back to the 'Replicas' related sessions, 'Only A Downstat', 'We Have A Technical' and 'The Crazies'. I have to say though that for the teenager, finally developing a profound appreciation of punk.... albeit 6 or 7 years after the event, it was the release of 'The Plan' that topped it all. Maybe a topic for another thread, but whilst Numan had thrown in much of 'Tubeway Army', the first two singles and select material from 'The Plan' into his sets over the 28 years I would love to see a pre-Replicas Tubeway Army mini-tour!

I often wonder about the success of the album, Tubeway Army and Gary in general at this time. As he is always at great pains to point out, this 'electronic pioneer' tag is something of a misnomer... as certainly Ultravox were doing something similar '76/'77, as were Kraftwerk earlier still.... and will a considerable degree of commercial success. Again from the horses's mouth it was the happy coincidence that Beggars ploughed additional money into the novel format of the picture disc that clinched the bubbling under spot for Tubeway Army over Simple Minds (sorry Mr Kerr.... I dunno why but I have always had an irrational aversion to Simple Minds....). A TOTP appearance propelled new bands directly into the front rooms of the young record buying public at prime time on a Thursday evening. A band like Ultravox never had that opportunity during John Foxx's tenure. Couple the exposure afforded by a TOTP tea time appearance with the appeal of a pop star coming across as someone rather leftfield as Numan certainly did on that first appearance and you have a potent potential spell for success.

Here is a positive review of 'Replicas' from the 21st April 1979 edition of Record Mirror, a supportive branch of the UK music press, at least in the first couple of years. 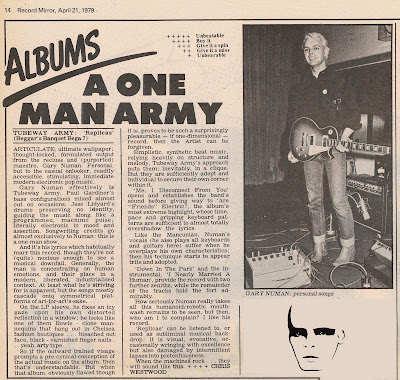 Sadly Numan's live performance career stalled not just once after the Wembley 'retirement' but also for the 'punk' Tubeway Army following a bloody evening with The Skids in Acton. For these reasons, 'Replicas' was never toured in it's own right, the first UK major headline tour embracing both of his 1979 No. 1 albums. As a result, fewer 'Replicas' tracks received a contemporary airing than would normally be the case for your average album/tour.... album/tour band.

The good news was that this touring anomaly was at last addressed in 2008 when Numan finally felt comfortable enough with his then level of revitalised success to allow him to revisit past glories.

To this end another 'Replicas 2008' gig will be posted in the next couple of days.