The Damned Foxes At The Sundown 18th August 1977 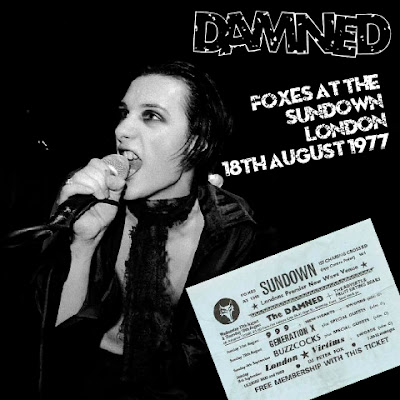 So, continuing a 'Music For Pleasure' theme, here is a set from The Damned that predates the release of the album but features a good mix of material that would appear on it. As ever, it is always a bonus to be able to tie in an audio recording with a contemporary review of the gig and here we have not one but two reviews of the gig that brought together The Damned, The Adverts and The Fruit Eating Bears.

The NME review is more sympathetic than the opinions of the Record Mirror reviewer. However, both writers are in agreement that the venue was too full and not yet in a suitable state to put on gigs..... the raised dance floor, upon all those Disco Men and Disco Women had displayed in a former life of the club, was a major obstacle in terms of seeing the band. Nonetheless, even with an impaired view of the stage action, the gig itself sounds pretty exiting and I would have given an arm and a leg to even hear the coupling of The Damned and The Adverts at this time! 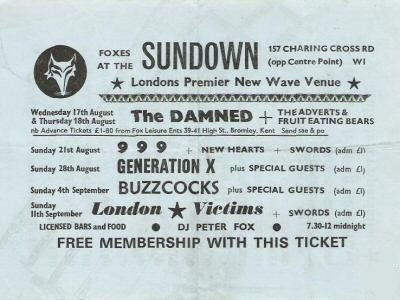 Sunday nights after the opening night looked good too!

Given the overcrowding of the venue, the sound on this recording has come out pretty well!

Let them eat fruit
Before the Adverts come on.
The Damned,
The Adverts,
The Fruit Eating Bears

This was the Sundown’s opening night as a punk venue. The management wanted the evening to run smoothly and wasted much breath begging the audience to keep of the stage and stop surging against the barriers and other obstacles.

It was certainly too full for comfort. Something about the height of the stage meant that only the people at the front could see the whole show. When anything happened on stage the frustrated crowds bounded forwards, the lucky spectators at the front got piled up and spilled onto the stage and no-one could see anything except from a distant, peep-hole balcony above. That’s where I spent most of the evening, and it’s out of touch to say the least.

The Fruit Eating Bears have changed beyond recognition. Last time I saw them they were a fast-playing underrated ‘60s revivalist band. Now they’ve jumped the bandwagon with short, fast, predictable songs with better titles than content (“Egyptian P.T.”?)

Not unexpectedly, the wildest reception of the night was given not to a band but to a record. “Anarchy In The U.K.” had the whole massed, packed audience singing , bouncing, tumbling onto the stage, like a swarm of new wave lemmings. It took some time to clear things after the dust had settled, but there didn’t seem to be too much strong-arm from security. Which is unusual and welcome.

It was the first time I’d seen the Adverts and they were even better than expected, one of the few new wave bands who manage to create songs that sound genuinely new and different, rather than trotting out the Ramones songbook or straight heavy metal. The Adverts’ music came over as sharp and clear on stage as on record. 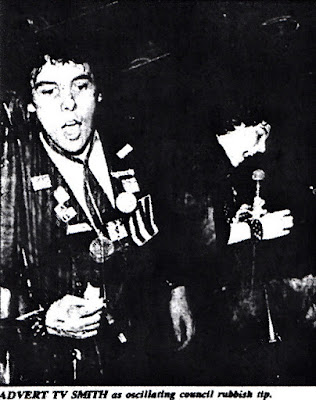 They started (and encored) with “One Chord Wonders” and if they were second rate musicians, as I’d been told far too often, the material was so strong it just didn’t matter. “Bombsite Boys”, “On the Roof” and a new two-minute epic “No Time to be Twenty-One”, all qualify as great pop songs: the thing that all the best new wave bands from The Ramones to The Clash have got in common is the ability to write instant impact rock with obsessive choruses. “Looking Through Gary Gilmour’s Eyes” could be one of the most memorable chants of the year, ranking with ‘Gaba’ and ‘God Save the Queen’.

“Bored Teenagers” is almost as catchy with T.V. Smith, pencil-thin, flickering across the stage like a berserk puppet, trailing his broken strings behind him, hanging over the audience like a demented son of Pinocchio. And he has to keep moving, otherwise Gaye Advert, in precarious black jacket and glowing trousers, smouldering motionless beside her amp at the back of the stage, would be the focus of attention.

Smith keeps folding over at the waist, spitting the words out, a quivering, menacing hunchback without Rotten’s magic but with commitment to spare. If I wanted to be escoteric I’d say Smith was playing Dwight Frye to Vanian’s Lugosi, but perhaps I’d better not bother. The Adverts sounded and looked good, approaching the same league as the Clash, the Buzzcocks and, of course the Damned.

But before the doomed quintet themselves, there’s something happening above the stage. Everyone’s breaking their necks to catch what’s going on. It’s a film show, no sound, but new wave fashion parades, mobile mug-shots of Mark P and McClaren, film of the no-longer Hot Roddies and, getting roars of approval from the sweating, staring audience, instant replays of Vanian’s lunatic combo at some other venue.

With the stage cleared again, and without much warning, it’s the Damned. Captain Sensible’s wearing shades so thick that he tries to walk off the edge of the stage. I think I can see Brian James in some sort of orange waist-coat. Rat’s at the back, testing the drums’ resistance to pain. Somewhere in the corner, the mysterious Lu is prowling unobtrusively, looking as mean and wasted as a drug-crazed vulture.

Dave Vanian started off in full Dracula gear but quickly shed slimy black accoutrements as the heat increased. His face looked whiter, his hair darker than ever before, and where T.V. Smith had stood above the audience, taunting them, Vanian seems to fling himself at them, weathering a storm of beer, spit and plastic glasses. He began the set by waving his hand at the audience in a gesture of contempt, but halfway in he’s diving into the crowd, allowing them to heave him back onto the stage.

They play the old favourites from the album, some of them sounding better than ever with Lu’s rhythm guitar allowing James not only room for fret-board manoeuvre but a chance to share more of the vocals than previously. The new songs don’t sound nearly as strong, unfortunately. “Stretcher Case” is probably the best, but “Problem Child”, the next single, doesn’t have the punch of “New Rose” or “N-N-Neat”.

“Politics”, dedicated to the Nazi Party, is a new slice of elementary anarchy, and I thought, in the confusion of the moment, I heard the Captain dedicate “Sick of Being Sick” to Presley. In case that’s in bad taste I’ll assume I’m wrong. “Take My Money” sounds promising.

With Vanian twinning himself around the drum-kit like a mesmerized serpent, I was thinking that this was about the best performance I’d seen from him, then things started to go wrong. The audience inevitably burst onto the stage and from then on the vocals were buried, Vanian was buried and Rat seemed to be trying to push the rest of the band much faster than they could go in those conditions. The second half of the set went from the blurred to the obscure, there’s something about the venue that even two good bands had to struggle against. They say the place is going to be adapted and re-decorated for the new wave. It’s going to be “…. one big party.” Perhaps they just shouldn’t invite so many people.

Sundown NOT for punk

With local shopkeepers trying to get the Roxy closed, it’s a good thing other venues are opening for punk rock. But the Charing Cross Road Sundown isn’t the answer. It’s rumoured that the place is going to be redecorated soon, but really alterations should have been made before it opened. There’s a raised dance floor in the middle of the hall, a remnant from the disco days, and once that’s covered with bodies no one else can see. A line of beefy bouncers along the front of the stage obscured the band from view, making problems even worse. So what’s the use of going there to see a band – especially ones who rely on visual excitement as well as the music – when you have to pogo 15 feet in the air to catch sight of just an arm?

This grand opening featured The Damned and The Adverts . The Adverts look as though they’ve got a hit with the excellent ‘Gary Gilmour’s Eyes’. That was one of only three which stood out in their set. I felt most of their material sounded too much alike, the ideas are there but they’re not being properly thought out. And singer TV Smith could do with more support to give the songs more variation. Bass player Gaye is improving all the time but the whole band was better at the Roxy. Other songs that stood out were ‘New Church’ and ‘Bored Teenager’, both of which have the same kind of hard speediness that works up a frenzy. I don’t think it’ll take them too long to get there other songs up to the same level.

The Damned weren’t at their best either, although they weren’t actually bad. I think they suffered most from the heavies standing at the front – they had to go off at one point while the audience was told to move back. The crowd control was a bit menacing from the guys at the door to the bouncers inside. Perhaps they were expecting trouble…

The Damned opened with ‘You Take My Money’ and performed a predictable but competent set. They haven’t managed to get a lot of new material released and I was a bit disappointed with the song that’s going to be their next single – ‘Problem Child’. It didn’t have the bite I’ve come to expect of The Damned’s songs. Maybe it grows on you; I hope so. If you’ve seen The Damned you’ll know most of  the set – ‘New Rose’ (still great), ‘Stretcher Case Baby’, ‘Neat Neat Neat’, ‘Fan Club’ and ‘Stab Your Back’ are the standards. And they did one for Elvis; ‘Born to Kill’. I’m not sure if that’s meant to be sick or not. And I think new guitarist Lu is a waste of time – I couldn’t hear him at all.

I watched the crowd as it was impossible to see anything other than the occasional glimpse of Dave Vanian’s naked torso or the top of Captain Sensible’s newly shorn head (I expect for trying to play his bass behind his head – the old superstar – before bouncing it off the floor). There was a short but illuminating sideshow which featured a young man wearing nothing but a pair of underpants and a pair of plimsoles, committing strange practices on what I imagine must have been a very close friend (male). I don’t think the evening was a success.

Email ThisBlogThis!Share to TwitterShare to FacebookShare to Pinterest
Labels: 1977, The Damned. The Adverts, The Fruit eating Bears