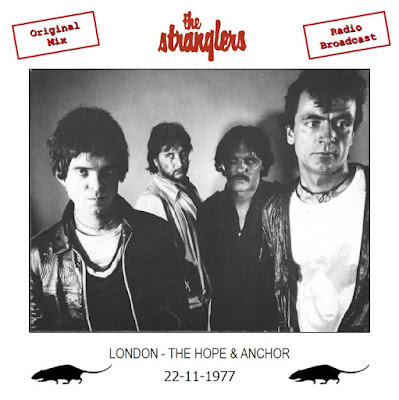 Here we have, courtesy of Dom P, the definitive version of the definitive 1977 set.  A bootleg of the band's appearance at the Front Row Festival had long been doing the rounds on cassette by the time that EMI (as owners of United Artists) finally put it out on CD in the early '90's. The consensus on this release is that it was rather a lackluster effort!

Dom's version addresses the failings of the official release.

Make no mistake, this is such an important recording (from any source). At this point in late 1977 The Stranglers' stock was high with two hit albums and a clutch of high flying singles under their collective belt they were the most commercially successful of all of the punk/new wave bands. By the time of the No More Heroes tour they had made the necessary transition from the pubs and club circuit to the larger sports halls and the Apollo-type entertainment Meccas.

However, the band's reappearance in the dingy basement of this famous Upper Street boozer was both a fond farewell and a thank you to each and every one of those London pubs that had nurtured and facilitated the success of the pub rock scene. There is no doubt that Pub Rock provided the venues and the environment that gave '77 punk bands the opportunity to come to the fore.

Without the patronage of pub venues such as the Hope (and its landlord Fred Grainger, famously name checked in 'Bitching'), The Windsor Castle, The Duke of Lancaster and The  Lord Nelson et al all of the London bands may not have made it.

The set that the band played that night is unique in that it features 'Tits', 'Mean to Me' and 'Choosey Susie', none of which are captured live in anything that has survived. I think that this was a deliberate closing of the door on the early phase of the band. From here on in the band would focus on new material.... 'Black and Whilst was just around the corner! 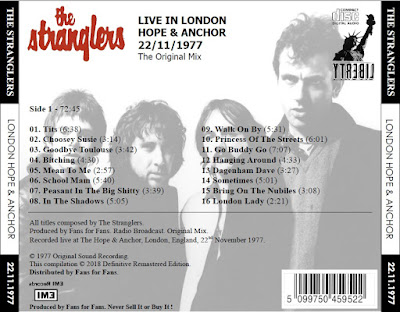 Thanks to Eric and Rat Zone for the artwork.
Posted by Musky03 at 20:48