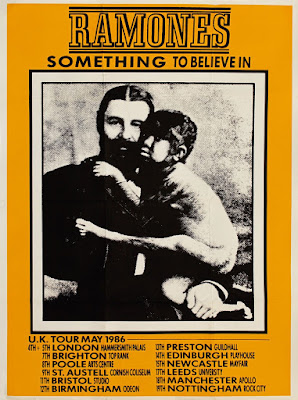 The Ramones, an institution. For some it was witnessing the Pistols that proved to be a seismic event that changed lives. For others though it was the first hearing of 1976's Ramones album. It still saddens me that a band who brought some much pleasure to music fans the world over were so troubled, dysfunctional and divided in their relationships both within the band and without. If you have't seen it I thoroughly recommend 'End of the Century', it does not make for easy viewing but it tells the tale of the Ramones as it was, warts an' all.

By 1986 much water had flowed under the Ramones bridge, like many of the original punk bands that had survived for 10 years they had evolved into something of a conventional touring rock band, although I really liked the late Dee Dee albums, 'Animal Boy' from 1987 and 'Halfway to Sanity' from the following year.

Throughout their career, The Ramones rarely strayed into political territory with their songwriting, but one exception from this period stands out. 'My Brain Is Hanging Upside Down (Bonzo Goes to Bitburg)' appeared on the 'Animal Boy' album and it was an open criticism of the then US President Ronald Reagan, who on a visit to a cemetery in Bitburg laid a commemorative wreath before delivering a speech at a nearby airbase that paid tribute to the victims of nazism. The problem was that among the 2,000 graves of Wehrmacht soldiers 49 members of the Waffen-SS were interred.... the very people responsible for the atrocities to which Reagan referred in his subsequent speech. The gaff prone President further fanned the flames of condemnation when he said en route to Germany that those buried in Bitburg 'were victims, just as surely as the victims in the concentration camps.' Penned by Joey and Dee Dee, the song infuriated the staunchly Republican Johnny Ramone. They did play the song in the following years (although rarely) but surprisingly it doesn't appear in this contemporaneous set...... perhaps Johnny was still too angry! 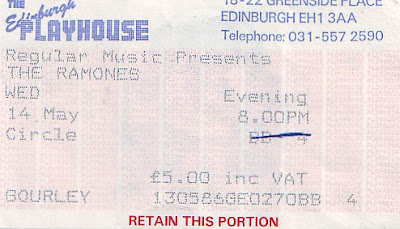 Email ThisBlogThis!Share to TwitterShare to FacebookShare to Pinterest
Labels: 1986, The Ramones