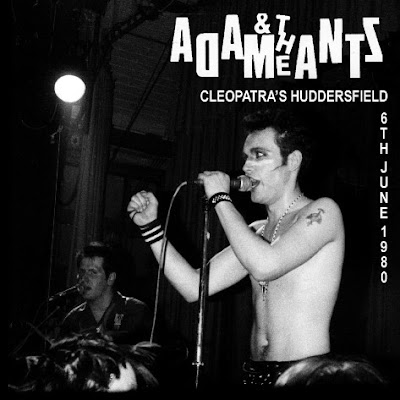 Here's a gig from the revamped Ants. Here they played at Cleopatra's in Huddersfield, a date on Summer's 'Ants Invasion' tour. For some reason trouble had a habot of following the Ants from gig to gig. A friend in Hayes spoke of older acquaintances in the area who followed the band and they said that a fight was guaranteed. I recall talking to Tony Barber (ex-Buzzcocks) about our appreciation of early Ants stuff and he said the same thing about the violence that their gigs attracted. This gig is no exception, a fight breaks out in the crowd during 'Fall-in'. It must have been a significant punch-up as the police were called and the gig was abandoned.

Was anyone on here, there?

Email ThisBlogThis!Share to TwitterShare to FacebookShare to Pinterest
Labels: 1980, Adam and the Ants