A One Off Missive by The DDL (Dickies Defence League) 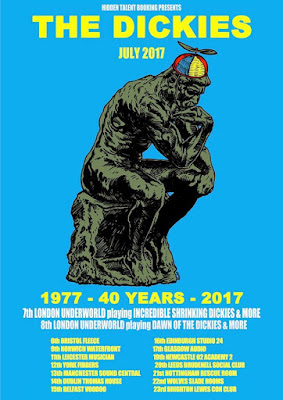 'The Most Dangerous Band in America!' screamed one banner headline in the on-going, and most unexpected, punk rock furore surrounding veteran L.A. punk band The Dickies. This weekend the band enjoyed a brief respite from the controversy with a trip to the UK. I will not regurgitate the background here (just google The Dickes and it is there). Part of the discussion revolves around a concept of safe spaces at gigs. I was curious as to just what this meant, so I looked it up. The idea of safe spaces originated the UK in the educational arena and this I understand. It was intended to be a clear statement that in educational institutions that adopted the 'safe space' policy harassment based upon an individual's sexual orientation would not be tolerated. In the US, the concept is more closely aligned to the right of women to be free of sexual harassment. All fine by me. The thing that I question here whether or not a gig is an appropriate place to create such safe spaces. 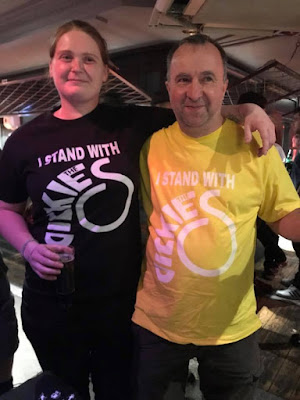 Mates Chris and Laura at the Underworld
7th July 2017.

Compare and contrast. Attendance at schools is compulsory and whilst the vast majority of school kids are diligently going about the business of gaining a good education with which they can make a meaningful contribution to society in the years to come, a minority are arseholes who diligently behave in such a way as to make the lives of some a misery (my own kids have for many years had to contend with Nazi comments - they are one quarter German!. In this context, vulnerable children certainly deserve the protection that the safe space concept can offer. This is a very different scenario to a gig, an event attended by choice. The idea of safe spaces here makes little sense to me. In fact it seems to me to be another step towards the trend to abdicate the individual from personal responsibility in terms of one's own safety. At the front of a gig there will forever be a handful of sad, opportunist individuals who think that they can get away with groping someone. This is of course completely repugnant behavior and whilst I am not a violent person I have had it out with individuals who I have seen doing this. But, but, if a gig gets ugly or threatening, the most obvious thing to do is to move away to the sanctuary of an designated safe space. I have always found that the back of the hall or the bar serves this purpose very well.

Let me put this in terms of threats that I have faced (never having been groped at a gig). Over the years I have been to quite a few gigs where politically fueled violence has erupted in the crowd. In each and every case I have not protested my right to enjoy the gig unmolested by fascists.... I have always had the good sense to get the hell out of the way. I would consider this to be a case of taking personal responsibility for my safety. If we were to be accepting of the introduction of safe spaces at punk gigs (or any gigs for that mater) at what point do we draw the line..... tube carriages segregated along gender lines (for surely some of the highest incidences of sexual assault occur on crowded trains)?

So back to The Dickies. I have heard what Leonard said to the protester, it was wrong and as the man said himself 'it wasn't my proudest moment', but faced with some serious allegations, not least predatory sexual behaviour towards minors.... I guess one can loose it in such an outburst. I would say this, I have been seeing The Dickies since 1990 when they made a their first return to the UK in over a decade. Since then I have seen them many, many times and I have never been offended by them because I understand the music, the props, the humour, everything about their hugely entertaining sets. Last year I took my kids to see them in Bristol. At the time my daughter was 14 years old. Never did I have any second thoughts about the suitability taking her to such a gig.

On this tour with echoes of the Pistols shambolic 'Anarchy Tour' forty years ago, UK gigs started to get cancelled in response to what was being said on social media..... gigs in Leicester and Norwich were axed.

As many commentators on this issue have already said, rock 'n' roll, let alone punk rock, has been obsessed with sex since Bill Haley first stepped on stage and no aspect of human sexuality has escaped its attention....... Gary Puckett and the Union Gap anyone! I trust that Leonard and Co can quickly put this behind them and continue doing what they have been doing to the delight of thousands of fans for the last forty years. 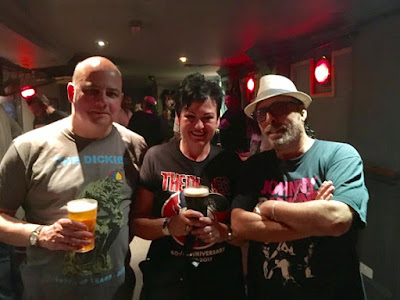 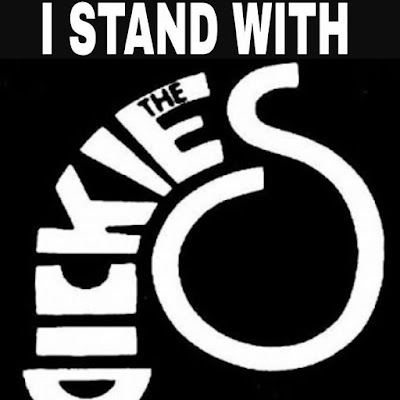 Email ThisBlogThis!Share to TwitterShare to FacebookShare to Pinterest
Labels: 2017, The Dickies