The Specials At The Troxy, London 21st November 2014 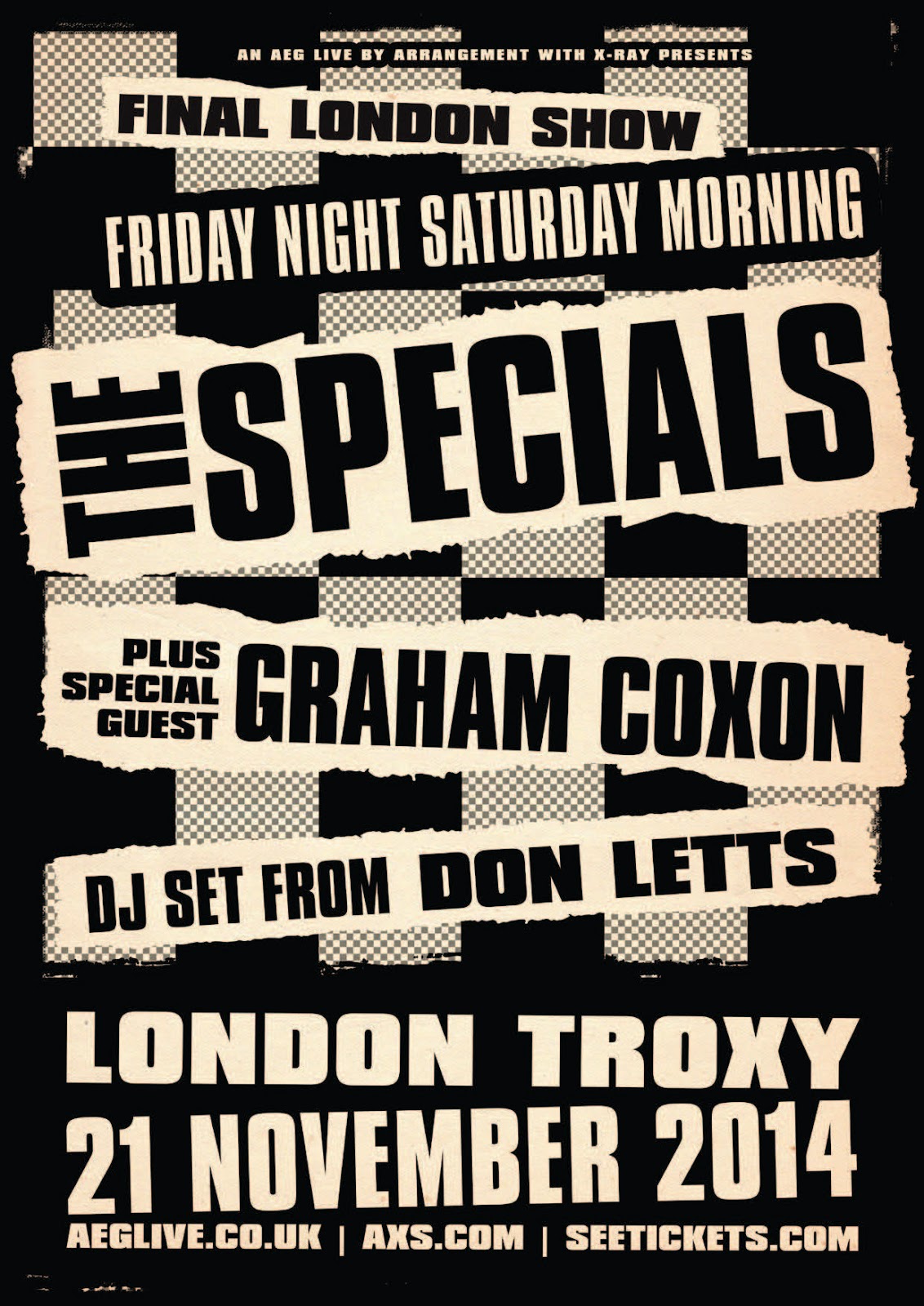 This gig posed me a problem. For the first time in the years of gig-going I double booked, such was the interval between booking and show. A few weeks ago I got a ticket to see The Angelic Upstarts and Sham 69 in Islington having forgotten that I had an engagement with The Specials across town in Limehouse the same night.

The Specials won out by virtue of the fact that their tickets were twice as costly and I had two of them.

It would have been good to have seen Graham Coxon, but sadly poor connections from home to the Commercial Road meant that we only arrived 10 minutes ahead of The Specials taking the stage. The first thing you notice is how beautiful the venue is, a lost secret tucked away in East London. I looked it up on Wikipedia and found that this art decco treasure first opened in 1932 and played host to the likes of Vera Lynne and Clark Gable in its day before falling in decline in the post-war years. Recently saved from it's use as a Mecca Bingo emporium, in the right hands this could be a great  addition to the London music scene.

And so The Specials came on to Ghost Town, in my opinion one of the greatest songs ever penned, but unfortunately one that the band have always struggled with to nail in a live setting. So now The Specials were out of the blocks, the brass were in place as were the strings (an addition from the last couple of years) and yet despite there being a full complement of musicians on the stage there were some very big holes. As ever, Lyn did his level best to fill those holes but even his stage exuberance could not mask the fact that Neville and now Roddy were absent. In Roddy's place was ex-Ocean Colour Scene guitarist Steve Craddock. Now Roddy Radiation may have been a thorn in the band's side, but he was the lead guitarist of The Specials and the very fact that his relationship with some band members was at times on a rocky road no doubt contributed to the band's edge. I don't recall much being said on stage about the line up change other than Terry's lyric in 'International Jet Set' of 'Hi Roddy here, she said Roddy who?'

The first part of the set was mostly dedicated to 'More Specials' and I have to say that in parts the band sounded a little discordant, but at other times the quality continued to shine through, 'Man at C&A' stood out as did 'Nite Klub', as always. Finally, I got my wish to hear them play 'Why?' which was preceded by Lynval's introduction that set the song in the context of the near fatal knife attack in the centre of Coventry and the racially motivated beating he received in West Hampstead after a gig at the Moonlight Club.

At this point we moved back a little to see the rest of the band. Despite my misgivings about the band without Neville and Roddy (I won't even venture into Jerry territory here) I never tire of watching the rhythm powerhouse of Horace and Brad doing what they so so well and seemingly effortlessly (although I am sure it is not!).

After 'Gangsters' we headed back out onto Commercial Road, homeward bound. I have no regrets about the gig, I'm glad that Terry & Co won out over Mensi & Co. I have no doubt that, were this my first live exposure to The Specials I would have absolutely loved it, but with earlier gigs in 2009 particularly they set a very high bar to top. 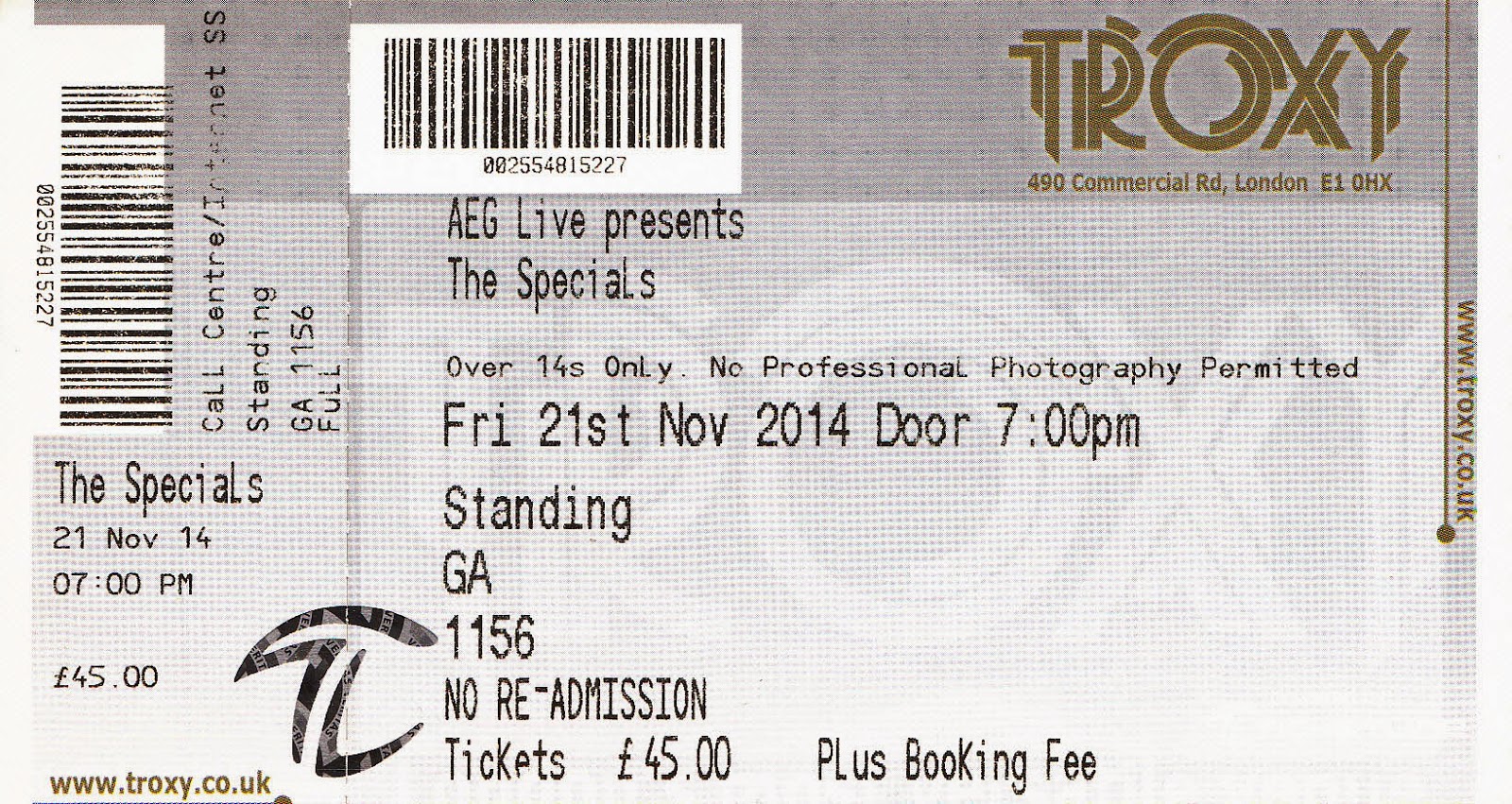 Email ThisBlogThis!Share to TwitterShare to FacebookShare to Pinterest
Labels: 2014, The Specials