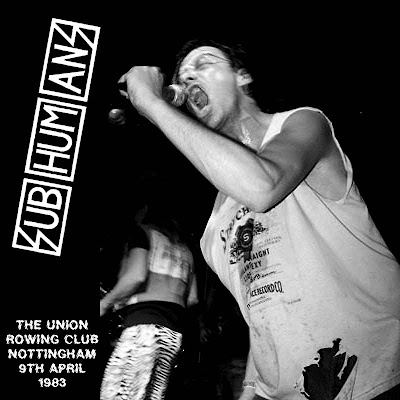 The most musical and, yes, most humorous of the crop of UK bands that together fell under the banner (and there were a lot of them!) of anarcho-punk in the early '80s.

Unlike the majority of their scene contemporaries who spat out their proclamations against the state in strictly London tones, The Subhumans delivered their message with a distinctly west country burr as the band hailed from Melksham in Wiltshire.

Frontman Dick Lucas has consistently delivered quality material in each of the bands that he has formed, from The Subhumans themselves to Culture Shock and Citizen Fish that followed.

Sometime shortly after this recording, the band released 'From The Cradle To The Grave', which with its epic title track (all 16 minutes of it!) brought punk rock right into the realm of prog rock and who could have foreseen that!

Email ThisBlogThis!Share to TwitterShare to FacebookShare to Pinterest
Labels: 1983, The Subhumans