Wreckless Eric at The MOTH Club
30th July 2022
This was an opportunity to see a rare UK date by Wreckless Eric, the enfant terrible of Stiff Records (not a bad epithet if your label mates are The Damned!). It was a spot by my daughter who loves Eric’s material. The gig was the first night in a three day festival run marking the 20th anniversary of the Hello Goodbye Show, a platform representing a range of leftfield, independent performers. The money raised by the event was to be ploughed back into efforts to get the independent radio station Resonance FM, home to the Hello Goodbye Show, back on the air. 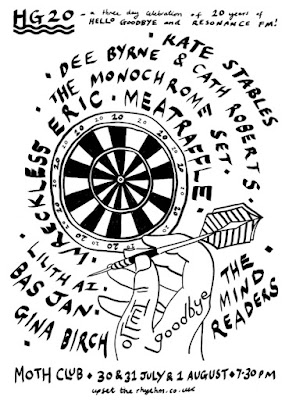 We saw one of the two other acts on the bill, namely Meatraffle from Brixton I believe. I think that all three of us thoroughly enjoyed them…. We even danced! A bit of Pigbag, Chumbawamba and God knows who else, not to mention an avant garde dancer (every band needs one don’t you know) and a keyboard player who does a very good impression of the 1977 Dave Greenfield! 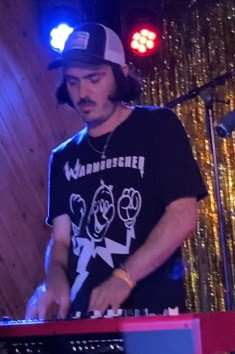 Decamped from the pub across the road Eric was on stage setting up his minimalistic gear (an electric and acoustic guitar and an amp). I am ashamed to say that I was unfamiliar Eric’s new material, although I did recognise ‘Father to the Man’ a reflection on his relationship with his father ‘Now I’m older I’m a lot like him, history coming back again…… I love my Dad but I don’t wanna be him’,  and ‘California/Handyman’ from his last album ‘Transience’. Whilst it was great to see a truly original artist of the punk era in such intimate surroundings, the venue started to work against him. A word here about the venue. The M.O.T.H. Club is situated behind the Hackney Picture House. It was established back in 1972 as the Hackney headquarters of The Memorable Order of Tin Hats, a South African Brotherhood established in 1927 to support Great War veterans. As in Royal British Legion Clubs throughout the country, regimental insignia adorn the walls. The capacity is small, about 400 by my reckoning, and tonight many punters were crowded around the bar and at the back of the hall deeply engaged in their own group conversations. Now I am all for socialising at gigs but always advocate reigning it in when the performer is on stage. The time for discourse is plentiful before, between and after performances. When the performer is solo on that stage with just a guitar and a mike, it’s disrespectful to expect them to compete with the indistinct yet volumous clamour emanating from the rear of the hall. And so it was with Eric, a couple of earlier comments culminated with a screamed demand from the stage ‘Fucking shut up!’. Clearly irked now he picked up the acoustic for a run through ‘Whole Wide World’, an attempt to engage the audience with something that they knew. Clearly they did not know anything else, and as I mentioned above I too am guilty of that, but we stood there and took it in. For fuck’s sake, the man hasn’t been standing still since 1977!
‘Whole Wide World'
Wreckless Eric at the MOTH Club
30th July 2022
A few more songs followed and the set was closed. Eric left the stage but despite the compare’s best efforts to bring him back it became clear that he was not returning to the stage for an encore.
Having only seen Eric once (nearly 30 years ago at the 12 Bar Club in London's Denmark Street) I had no way of knowing whether this was typical behavior or not, although I suspected the latter. This was proven to be the case when he posted a tweet the following day. 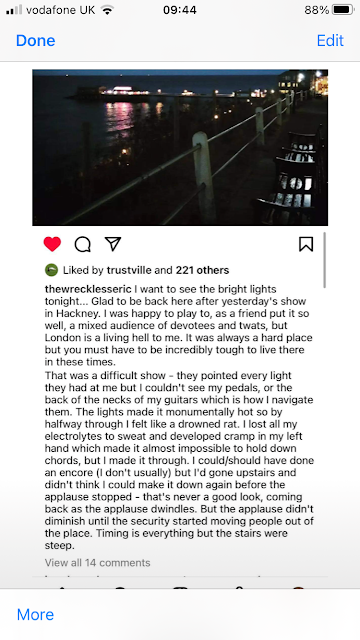 So it was clear that whilst indifference amongst some of the audience was a contributing factor, the issues were multiple as the venue seemed to conspire against the pint sized troubadour.
So Eric, I hope to see you play these shores again under more favourable conditions.
Posted by Musky03 at 12:24